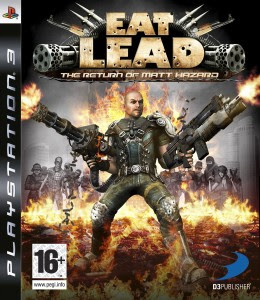 Get ready for the return of the most popular video game here...of the 1980's.

Matt Hazard is staging his 'comeback' against all his retro enemies in a hilarious parody of the last 25 years of gaming.

Starring the voices of Will Arnett and Neil Patrick Harris!

'Eat Lead:  The Return of Matt Harzard' is a bit of a weird game to review in all honesty.  It's one of those 'breaking the fourth wall' style games that both references and parodies things in the outside world all while trying to be an exciting and entertaining game but does it manage to juggle all of those plates at once without dropping them?

The major flaw of the game is the game play itself.  Go in to a room, take cover, shoot everything that moves and then go through whatever door opens up before doing the same thing again.  Normally that would annoy me to the point of playing it for an hour or so, sometimes even less, before putting the controller down and finding something better to do.  Yet that didn't happen here.

While it is very true that the game play is very repetitive in places, the sheer fun nature of the cast and the story makes the gamer completely unable to stay mad at the game for long.  Instead you are so busy laughing your ass off at the references, the jokes and the superb voice casting that the time just flies by  while you are shooting the hell out of everything. 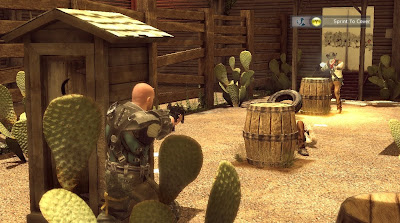 The main strength of the game comes from two places.  The references and in jokes are very well slotted in to the game and really cracked me up.  They're made even funnier by the cast, in particular Will Arnett as Matt Hazard.  I really couldn't imagine anyone else in the title role because his voice is positively perfectly as the bitter and cynical character.  Add the always funny Neil Patrick Harris to the mix and you have a fantastic cast that really make the game a hell of a lot more fun than it should really be.

Another thing that I liked were the funny little messages that poked fun at the fact that you are waiting for the game to load in that it would have little jabs at other games and at the game conventions such as tutorial sequences and other such things.

This isn't an awful game by any stretch of the imagination.  That honour goes to the awful Doctor Who game called 'Return to Earth'.  This game is the gaming equivalent of a 'so bad it's fun to watch' movie, although that may sound a little harsh.  While the level design and the repetitive nature of the game play does start to get a little annoying after a while, the sense of fun and the humour really made me enjoy this game a hell of a lot more than I maybe would have done other wise.