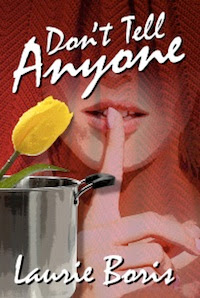 When pneumonia lands Estelle Trager unconscious in the emergency room, it ruins everything for the stubborn 65-year-old woman. She'd been keeping a secret—a deadly secret—that she'd planned on taking to the grave. But now her son Adam and his wife, Liza, know about her tumors. Adam is outraged, but Estelle, who watched her mother and grandmother suffer from breast cancer in the days when no one dared speak its name, has no intention of putting her family or herself through the horrors of cancer treatment. Estelle decides there is only one solution: ask Liza, the 33-year-old daughter-in-law she once called a godless hippie raised by wolves, to kill her.

A horrified Liza refuses and keeps the request—among other things—a secret from her furious husband. But she tells his younger brother, Charlie, a close friend from college with whom she shares her own confidences, despite Adam’s serious case of sibling rivalry. Armed with nutrition textbooks and her neighbor, a savvy nurse, can Liza win over her mother-in-law and convince her to consider other options before the cancer, the secrets, and Estelle's determination to end her life win out?

After reading a message in a blogging group asking for people to review this book I volunteered as it did sound very interesting but then I have to admit that I just let it sit there for a couple of days before I got to reading it.

Because of the 'C' word.  Cancer.  Everybody knows someone who has been affected by the disease.  I lost my father to it a few years ago and still haven't gotten over the loss.  So I hesitated reading this through fear of it bringing back too many painful memories.

One day, I decided to just start reading it.  I mean I could just always put it down if it upset me too much right?  Well, I didn't want to put it down.  The easy pacing of the story really helped in that it didn't rush in to things too quickly yet neither did it take too long.

Another one of the strengths of the book was the characters.  They honestly seemed like real people and because of that the reader really gets sucked in to the story and that really makes it a page turner.  It's almost as if you are a friend of the family and you are watching the events unfold in front of your very eyes.

I also liked the fact that the story was told from several POV's but it's essentially Estelle's story and it's remarkably true to life.  The characters go through the whole gauntlet of emotions and actions that someone suffering  from Cancer and their family and friends go through.

While it was a bit of a hard read for me because of losing my father to the same disease, this is a very well written, well paced and incredibly emotional book.  It's a real tear jerker of a book but don't take that as an insult, it's meant in the best possible way.  Well worth picking up.

Posted by Pat Scattergood at 14:52