An Interview With Peter Bergting, Author / Illustrator of 'Domovoi' 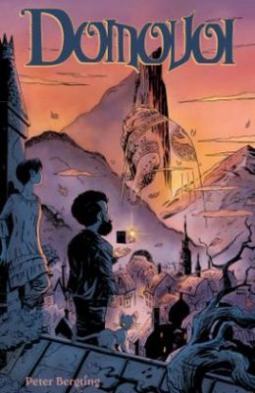 Peter Bergting, author of the new graphic novel ‘Domovoi’ as well as the comic book series ‘The Portent’, has kindly popped in to the Curiosity of the Social Misfit world to talk about his career and his inspirations.

PC:  Welcome to the site Mr Bergting, it’s an honour to have you here with us today so let’s jump straight in to things.

PC:  You are perhaps best known to comic book fans as the creator of the series ‘The Portent’ that was published by Image Comics.  How did writing that series differ to writing your new graphic novel ‘Domovoi’?

PB:  For starters, The Portent was my first attempt at doing a full length book. I had written stuff in the past but this marked the first time writing a coherent story from start to finish. And The Portent had at least three false starts before it ended up at Image Comics. Not wildly different, some characters stayed the same and the basics of the plot. Well, that’s not entirely true, the very first inklings of the story were set in WWII.

PC:  ‘Domovoi’ has a dark, fantasy feel to it yet feels at home in the real world at the same time.  What inspired you to write such a story?

PB:  Domovoi was intended to be The Portent part II but ended up being so different in setting I separated them. Domovoi was also originally published online when Dark Horse got wind of it. I redrew everything and trimmed the story from that point. And the story itself began life as a YA novel, probably 7-8 years ago before I realized it would be better off as a graphic novel.

PC:  You have always had a rather unique drawing style.  Have there been any artists that have inspired you during your career?

PB:  For sure. The main influences that have stayed with me are Moebius, later came Mezieres and Mignola. Artists that begin with M mostly. Hm…

PC:  Not only are you a comic book and graphic novel writer, you have also written a fantasy series published in your home country.  Are there any plans to publish and translate them in to English at all?

PB:  Yes, when time permits. I’m translating them myself so other stuff always gets in the way. I have an editor waiting for me to turn in pages but right now I have to focus on other stuff.

PC:  You have written a lot of stories during your career but do you have a particular favourite at all?

PB:  Yeah, I think my favourite is a four page story in Popgun that we actually won an Eisner for. That little ghost story is so slim and coherent and with a nice twist I didn’t even see coming myself.

PC:  You’re known as both a writer and an artist but which one would you say you are most at ease with or do you feel as comfortable in both of them?

PB:  I think it goes hand in hand. I write painterly and try to paint stories.

PC: Do you have a particular quirk or tradition when you’re working?

PB:  I’m sure I have many. Surfing the web for sure. But one thing that I guess is a quirk is that I have to try the nib of the pen before drawing, like I use to do with inks. Just press down hard to see if the nib responds the way I want it to, leaving a little blotch. I do that digitally as well, which makes no sense at all!

PC:  You are very personable with your fans, has that lead to any funny stories or experiences?

PB:  Yeah,  many of them have ended up good friends. And that’s a great experience. One of my first encounters was Neil Hill who slammed the language in The Portent, I asked him to help me out if he thought it sucked and he stayed on as my editor for the rest of the series.

PC:  What’s next for Peter Bergting?

PB:  Next up is finishing The Untamed GN and after that straight into The Portent part 2, finally, after 7 years.

PC:  Thank you so much for talking to us here today.  It’s been an absolute pleasure Mr Bergting.

'Domovoi' is available to buy now from all good bookstores and sites!

Posted by Pat Scattergood at 14:37