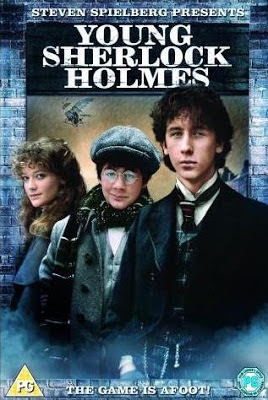 What would have happened if Sherlock Holmes and Dr. Watson had met as schoolboys? Why, the solution is elementary - nothing but adventure! And that's just what director Barry Levinson gives us in this special effects spectacular that sends the super-sleuth on his very first case!

When a plague of bizarre, puzzling murders grip London, young Holmes and his new found friend Watson find themselves unwittingly entangled in the dark mystery. So, 'the fame is afoot!' And the budding detective is off on an adventure to solve the most amazing case of his most extraordinary career!

I have to admit that as shocking as it sounds, I had never seen this movie.  I'll sit here while I wait for the gasps of horror to subside.

While I had never seen this before I am seriously glad that I have now.

As a fast paced mystery thriller, this movie presses all the right buttons.  There are twists and turns galore, great characters, great performances and some of the best settings I've seen in a mystery movie but let's start at beginning.

This movie tells the story of what may have happened had Holmes and Watson met at school.  It's a rather interesting take on the familiar characters and one that works brilliantly well for a myriad of reasons.  The first of these being the writing.  The story itself flows from scene to scene with a very fast pace yet there's time for some great character development as well as some very funny scenes.

The main strength of the movie however is the near perfectly cast group of actors and actresses that bring the characters to life.

Nicholas Rowe and Alan Cox bring Holmes and Watson to life in a fantastic way.  In fact, you would honestly believe that they were best friends in real life that just happen to have been caught up in a murder mystery.  Rowe in particular plays the Holmes part  in such a way that while he's equal parts socially awkward due to his high intellect yet he also shows a confidence that I haven't seen in the character before.  Normally the character would be played as confident to the detriment of other characteristics yet Rowe plays it perfectly.  Don't count out Cox however, he is the perfect counterfoil to the relatively suave yet sometimes awkward Holmes.  Cox plays Watson as bumbling yet well meaning without it getting too OTT and slapstick.  I love that about the character and really think that it's one of the best performances in the whole movie.

The special effects here are positively superb considering the age of the movie itself.  The 'Knight' scene is an early credit for the Pixar fellows and is a definite highlight of the movie itself.  In fact, I found myself glued to the screen not only for the whole movie but even more so when watching that scene itself.

While it is a shame that there are no special features at all, this is still an absolutely essential purchase.  It's a complete rubbish cliche to use but there really is something for everyone here.  There are some superb scenes that the younger Holmes fans amongst us will love and there are some great little nods to the other stories for us older fans as well.  One that is well worth picking up, especially if you consider how cheap the DVD of the movie is.

Keep an eye out on the credits scene for a nice little surprise, although it makes me wonder if they planned to make more movies.

Posted by Pat Scattergood at 15:16