World War Z: The Art of the Film Review 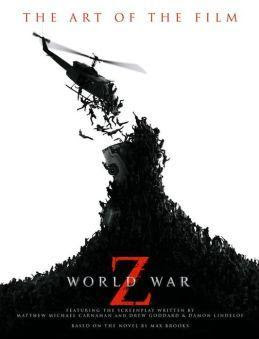 Written By Matthew Michael Carnahan, Drew Goddard and Damon Lindelof Based on the Novel By Max Brooks

'World War Z: The Art of the Film' is the official illustrated companion to the movie, and features a wealth of stunning production art, design sketches and storyboards, alongside the full shooting script.

I've been looking forward to the movie version of 'World War Z' for a long time, especially considering some of the superb names in the cast.

This release from Titan Books is the companion to the movie that is based on the novel by Max Brooks but what we have here isn't the normal companion piece that basically hypes up the movie, throws in a couple of pictures and thinks the fans will be happy.  Instead we have been given the shooting screenplay, concept art, quotes from the cast and crew and much more.  There is a hell of a lot of things here to keep both newcomers to the story and fans of the original novel entertained.

The main part that I liked was the addition of the screenplay.  I've always loved reading screenplays as it's always interesting to see how the screenplay differs from the end product, although I'll be honest here, I haven't seen the movie yet so I can't tell you how similar to the movie itself.

I absolutely loved the layout of the book itself.  The screenplay was illustrated with scenes from the movie itself but there were also quotes from the cast and crew peppered throughout that as well.  Then we came to the concept art.  I would have liked to have seen a little more information about the behind the scenes process of creating the art but the quotes from the cast and crew that are also peppered throughout this section gives a little nod here and there about their ideas.

All in all, this is an absolutely superb companion to the movie and has made me even more eager to get to the cinema to see it.  I honestly can't wait to see some of these scenes in action because from the pictures here, they look epic in scope and very well shot.