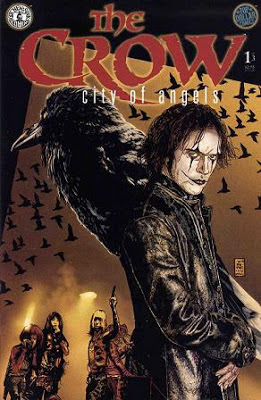 A crow flies over as a gang has a man and his son bound on a dock facing the waterfront. As one of the gang members begins filming the ordeal, the father begs for his son's life. His pleas however fall upon deaf ears as his son is murdered. Immediately afterwords the man is shot 3 times by the de-facto leader, the two bodies are then dumped into the ocean. As the father and son sink to the bottom, the fathers dying view is of a crow, seemingly flying up through the depths and out into the night.

In this first issue of the comic book adaptation of the much maligned sequel to the amazing movie starring Brandon Lee, we are introduced to all of the major players in the story.

We don't get as much back story for the actual murder in this issue as we do in the movie but the art work more than makes up for that by using subtle hints and nods to what is going to happen.  That really adds a feeling of dread to proceedings but I've gotten ahead of myself.

The writing here, while not amazing, really serves it's purpose to introduce the characters and to give some of the back story to both Sarah and to Ashe.  Wagner does do that really well but for some reason, it just isn't as effective as the movie itself at doing that.  That's a real shame because there is always much more scope with comic books yet he seems to have played it quite safe with this issue.  Don't get me wrong, it's a good issue and serves the purpose but it just felt like it was missing something.

The art however, more than makes up for that.  In fact, the best way of describing the art would be that it looks like a slightly more in your face version of Michael Avon Oeming's work on 'The Victories' comic books.  Obviously those came after this but I can't think of a more fitting description for it.  The art really makes the brutality of the murder itself pop off of the page but that's not where it comes in to it's own.  Much like Oeming's work, the settings are where the art comes alive.  They really have make settings feel downbeat, grimy and dirty just like in the movie.  I was quite impressed with how well they handled that part of the story.

All in all, while the writing played it a little safe, the art more than raises the quality of the issue.  In fact, it's made me want to go straight in to reading the second issue of the three issue run.  If you are a fan of the 'Crow' stories, novels and movies then you will no doubt either like this or already own it.  I'd still say it's worth picking up.