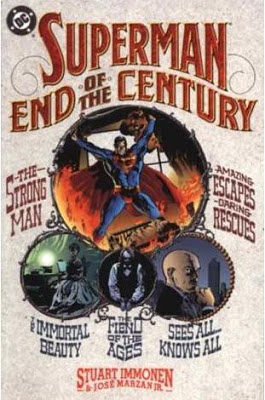 
On the eve of the new millennium, someone is committing arson in Metropolis - and the target of their crimes is none other than Lex Luthor!

And when the immortal Contessa del Portenza arrives, demanding custody of Lena, Luthor's infant daughter, the criminal mastermind realises that this is a threat he must take seriously...But what Luthor doesn't know is that the Contessa has another child, an immortal like herself - but one who believes that humanity are beneath him, and who has no qualms over killing. And when Luthor inadvertently reawakens this creature, only one man is mighty enough to stop his killing rampage...Superman!

'End of the Century' is one of those Superman stories that sounds absolutely brilliant on paper but then when the idea is executed it just doesn't work.

That's not to say that Stuart Immonen is a bad writer because he really isn't. The writing is fine for what it is but for some reason it just doesn't gel. The story itself flits between present day and flashbacks and while they are both separately interesting, together it just comes across as a bit disjointed.  In fact, there were even some parts that felt a little dull or out of place.

The art however is quite hit and miss. There are some absolutely fantastic pages here that made me think that there was a massive talent involved with this story but then there were some really bland ones as well and for me, that kind of took me out of the story a bit.  This was most evident in the ending of the story itself.  While I didn't want it to be OTT or anything like that, the art fell flat the most there and that's the one part of the story that you needed it to be the most exciting.

The Superman character here just came across as incredibly dull, which considering it's a Superman title, I found that quite strange. It kind of evens out because of the simple fact that Lex Luthor here is given many other layers. I did like the fact that here Luthor managed to look both strong and menacing yet vulnerable, which made a nice change from him just being a snob with an attitude problem.

All in all, I really wouldn't say that this is an essential purchase. Maybe class it as one for just the major hardcore fans out there.