Super Boys: The Amazing Adventures of Jerry Siegel and Joe Shuster - The Creators of Superman By Brad Ricca 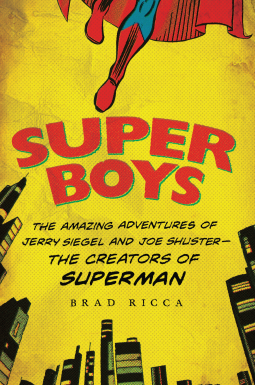 The first comprehensive literary biography of Joe Shuster and Jerry Siegel, creators of Superman and the inspiration for Michael Chabon's Kavalier and Clay.

Drawing on ten years of research in the trenches of Cleveland libraries, boarded-up high schools, and secret, private collections, Brad Ricca's Super Boys is the first ever full biography about Superman’s creators. Among scores of new discoveries, the book reveals:

-  the first stories and pictures ever published by the two
-  the various elements of the Superman mythos that Siegel tried out in stories in his high school paper
-  the real inspiration for Lois Lane
-  the template for Superman’s costume
-  the exact circumstances of the death of Siegel’s father
-  details about Joe Shuster’s missing years, including his stint illustrating pornographic novels
-  the influence that touring strongmen had in the creation of Superman

Super Boys explains, finally, what exactly happened with the infamous check for $130 that pulled Superman away from his creators—and gave control of the character to the publisher. Ricca also uncovers the true nature of Jerry’s father’s death, a crime that has always remained a mystery. Super Boys is the story of a long friendship between boys who grew to be men and the standard that would be impossible for both of them to live up to.

The story of Siegel and Shuster has been told through various mediums many different times throughout the years but this is surprisingly the first comprehensive biography of two of the most iconic creators in comic book history.

The story of Shuster and Siegel is a bittersweet one tinged with moments of  success and creativity.  Ricca doesn't hold back on any information or leave any stone unturned and that leads in to one of the most infomative biographies that I have read in a long time.  However it is his easy writing style that hooks the reader in.  It's almost as if you are sat with him discussing the lives of two of the most legendary names in comic book history.

I found so much that I had never known about the two of them.  Especially the missing moments in Shuster's life.  I had never known that he had gone on to illustrate pornographic novels.  I also found the bittersweet nature of how they struggled to live up to the standard set by their legendary character that they created and then the story of that infamous $130 check that took the character away from them.  When I got to that section, the easy writing style of the author gave me, as the reader, so many emotions.  I was angry about how they had their character taken away from them, sad for them that no matter how they tried they couldn't live up to the standard set by that character and so much more.

It's so sad that two great names like Shuster and Siegel suffered so much during their lives and pretty much gave their all to create one of the most iconic characters not only in comic book history but also in literary history too.

This is most definitely one of the most essential books that I've ever had the pleasure to read about comic book creators of any kind.  If you are a fan of Superman or comic books or even want to just read an interesting book about two incredibly creative people, then you seriously need to get out there and invest in a copy of this book.  I know that I will be.

Posted by Pat Scattergood at 13:11