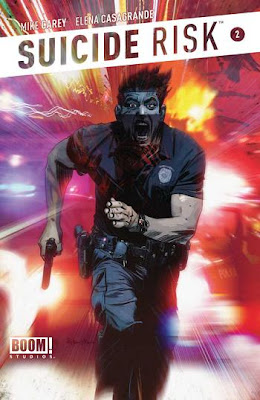 Following a lead, he discovered two lowlifes who seemed to be able to grant a person powers… for the right price.

Thing is: you don’t get to choose which power. It’s seemingly random, a crap-shoot, a risk. And now Leo will find out just how big of a risk he took…

After the brilliant first issue of this new series, I had massively high hopes for this issue but was there any way that it could possibly live up to that high standard?

The answer is a resounding yes and then some.

Mike Carey has once again crafted a superbly written and paced thriller with some great twists and turns that have left me wanting to get my hands on to issue three as fast as I can.

The characters are slowly but surely being revealed and there is a little bit more behind Winter's mental state as well and I really liked that slow build to seeing just how everything is affecting him.  All too often things happen to the characters with no effect on them at all yet here Carey takes the opposite approach.  It makes the character seem more layered and really helps the reader to get behind the character and want to know what is going to happen next.

Once again, the art is absolutely superb.  The first  issue was the first time I had seen Elena Casagrande's work and here, it's just as good, maybe even better as the characters really seem to come alive on the page.  The best part of this issue art wise was the 'transformation' Winter goes through when he discovers what his power is at the beginning of the story.  It had a real cinematic feel to it and wouldn't have been out of place on the screen.

This is definitely a title that I will be keeping a very close eye on.  I'm seriously wondering just how they are going to top this one but with quality like this, I have no doubt that issue three is going to be fantastic.