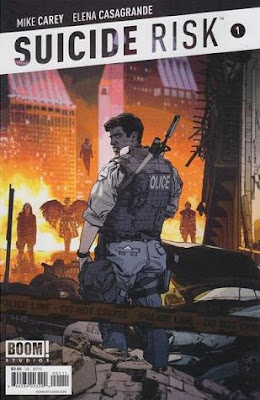 Super-powered people are inexplicably rising from the streets and there’s a big problem: Too many supervillains, not enough superheroes.

Heroes are dying, and cops are dying twofold. Humanity is under-powered and good people are suffering untold tragedies trying to stem the flow.

Beat cop Leo Winters is one of those struggling to make a difference. And the answer just might come in the form of two lowlifes with a dark secret.

I'd heard many majorly good things about this title but I'd put off reading it for a little while because of the sheer amount of hype surrounding it.  I honestly thought that there was no possible way that it could even come close to living up to the hype.

And you know what?  It more than lived up to it, it surpassed it!

The fast paced nature of the story throws you head first in to the action and the carnage.  In fact, it doesn't give you even a moment to catch your breath yet Carey does something very clever here.  While the action moves along like a cinematic action sequence, he shows enough glimpses of both the villains and the main protagonist to whet your appetite enough to want to jump straight in to issue 2.

Another thing I really liked about the writing is that while it is action packed, it shows the aftermath of all that carnage with such a simple clarity that it's nice to see how they deal with that without it falling in to melodrama.

The art is another strong point for this release.  In fact, it makes the scenes jump to life and leap off the page.  This is most evident in the action scenes but don't count this release out as just another superhero release.  The shocking ending of the issue is drawn in such a way that the shadows hide a fair bit of what has and is happening.  I loved that approach because it's made me eager to see just what is going to happen next.

This is definitely a title worth keeping an eye on.  I, for one, will be grabbing the second issue and I think all of you should too.