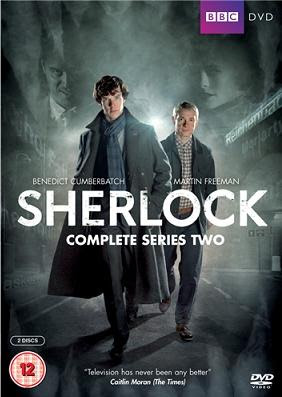 
Becoming embroiled in the complex plans of the dangerous and desirable Ire­ne Adler, Sherlock needs every one of his remarkable skills to survive and an invitation to the wilds of Dartmoor brings our terrified heroes face to face with the supernatural. Meanwhile, Moriarty, still out there in the shadows, is determined to bring Sherlock down - whatever the cost.

Sherlock Holmes and John Watson return in three of their most exciting adventures:

A Scandal in Belgravia
The Hounds of Baskerville
The Reichenbach Fall

Review
The first series of 'Sherlock' starring Benedict Cumberbatch and Martin Freeman was an absolutely fantastic piece of television from the BBC and I honestly couldn't wait for the second series.

While not as great as the first series, this is still a great detective series with some brilliant performances from the cast.

In 'A Scandal in Belgrade', the story of a young royal being blackmailed because of some incriminating photographs is very well written. The characters are really well written with an absolute truck load of twists and turns. We also get an appearance by Sherlock's brother as well, which gives us an insight in to his family life and their relationship.

In 'The Hounds of Baskerville' we get an appearance by Russell Tovey, from the television show 'Being Human' as a man whose father was ripped apart by a mysterious dog in Dartmoor. This one was the only disappointing story out of the three on this release because, for me, the adaptation didn't really work. The original story has a dark Gothic feel to it that really adds to the dread and foreboding nature of the story but that's missing here. While Cumberbatch and Freeman do well with the material, it just didn't seem to gel.

In the series finale, 'The Reichenbach Fall' we get an absolute brain teaser of a cliff hanger involving not only Sherlock himself but his arch enemy Moriarty. I won't give too much away about the story but I really thought it was one of the best of the revamped Sherlock Holmes stories.

All in all, this is a pretty good series except for one story. While the special features aren't ground breaking, they are well put together and interesting. We also get appearances from Molly Hooper, Det Inspector Lestrade of Scotland Yard, Mycroft Holmes, the loyal Mrs Hudson and a wonderfully over the top performance by Andrew Scott as Moriarty so this is definitely a set worth picking up.
Show 3.5/5
Picture 4.5/5
Sound 4.5//5
Special Features 3.5/5
Overall 16/20
Posted by Pat Scattergood at 12:49