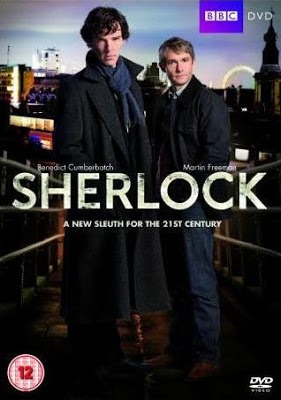 London 2010.  Sherlock Holmes is the most brilliant mind yet is friendless and alone.  John Watson has come home from Afghanistan injured and cynical.  Inspector Legrande is the best cop that Scotland Yard has got yet knows he needs Sherlock.

The most baffling cases.  The most dangerous enemies.  All coming out of the fog.  All is not lost however.  Sherlock Holmes is on the case.

Review
I'm always wary with updates, remakes or re-imaginings. Sometimes they go well and sometimes they are abominations.

This one is the former.  In fact, it's more than that.  It's an absolutely brilliant update of the Sherlock Holmes character itself and the stories themselves manage to stay true to the feel of the originals, while gaining a personality of their own.

This set contains all three episodes from the first season as well as the exclusive pilot episode.

Firstly the writing is absolutely spot on. Sherlock has been written as both a genius and yet fragile too. He's not infallible. He makes mistakes. The cases are interesting and have many twists and turns.  In fact, they feel like Doyle's stories as if he had written them today.  I can't honestly stress just how good the writing is.  It's intelligent, exciting and the pacing is fantastic.  You have time for character development, some great flashes of back story and the cases themselves are exciting and puzzling at the same time.

The acting is brilliantly cast. Cumberbatch is a revelation as Holmes and really plays off the other characters without coming across as conceited, which for a Sherlock Holmes performance is brilliant.  I've seen many different versions of the Holmes character but Cumberbatch's portrayal is one of the best I've seen.

Martin Freeman is great as Watson and really uses the relationship between Watson and Holmes in a really subtle way. I firmly believe that this is one of his best performances of his career.  Freeman really makes the relationship look like it's growing with each episode.  As intelligent as the writing is, it would have been for nothing had not lived up to the promise of that but Freemann and Cumberbatch really make the characters their own.

The extras are a great addition to the set but seem to fall a little short of the quality of the series. Although the addition of the pilot episode was a great move.

Highly recommended for all fans of Sherlock Holmes or even just people that want to see a mystery / police show that doesn't insult their intelligence or resort to cheap cliches.
Show 4/5
Picture 4/5
Sound 4/5
Special Features 3/5
Overall 11/15
Posted by Pat Scattergood at 02:27