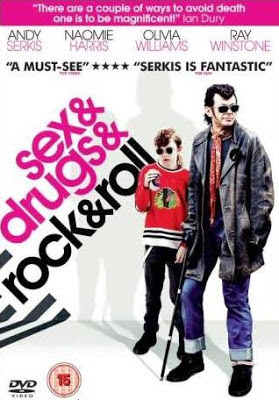 Sex & Drugs & Rock & Roll is the story of Ian Dury, legendary punk and lyricist who, together with his band The Blockheads, created some of the wittiest, most original songs to come out of Britain in recent decades.

During his lifetime and to this day, Dury inspired admiration and hilarity, using his childhood experiences (including the polio that disabled him) and acute powers of observation to fashion a unique hybrid of rock 'n'roll and the musical hall.

As a massive fan of Andy Serkis and of the punk rock legend known as Ian Dury, I couldn't believe that I was yet to watch this movie yet wasn't sure if they would be able to do his story justice.

Ian Dury's story is both a sad one and one full of hope and strength.  He over came so much and achieved so much that I honestly thought that there was no better source material for a movie than that.  For the most part the filmmakers got it very right.

The best part of the movie by far is Andy Serkis.  You can most definitely tell just how much of a Dury fan Serkis is by the sheer amount of  effort and love he put in to the performance.  It was honestly just like watching Dury himself.  The mannerisms, his way of performing, even his way of talking was spot on and I can honestly see why he won so much praise for his performance.  Serkis really comes in to his own in the performance scenes.  These really have to be seen to be believed because it felt like Serkis was Dury and you were watching the band themselves perform.

Another strong point of the movie was the general feel of the movie.  Some of the scenes felt run down and grimy, especially in the pubs and clubs that the band performed in during the beginning of their career.  It really felt like you were watching them perform for real.

There were were some great performances during the movie too and the varied cast do a good to great job with dialogue but sadly a couple seem underused or even misused.  Ray Winstone, while good as Dury's father, just seems to be a character that so much more could have been done with.  His story was told in flash backs to Dury's childhood but something felt like it was missing from that period of his life.  I suppose it was because I wanted to see more.  Another one that was underused was Olivia Williams as Dury's wife.  I'm kind of conflicted about putting her down as a negative in the movie because she did give a good performance with the dialogue and scenes she was given, it's just that she wasn't used all that well and that's a shame because she really is a good actress.

All in all, while this was a good movie it wasn't a great one and that's disappointing because it had so much potential to be a much better movie than it ended up being.  That said however, this movie is most definitely worth getting solely for the performance by Andy Serkis.  It really is worth looking past the flaws to be able to watch an absolute master of the craft at work.

Posted by Pat Scattergood at 14:07