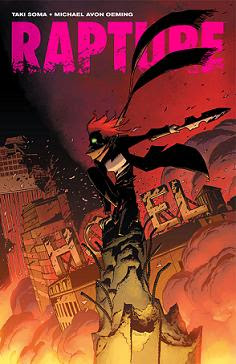 After warring for  a century, Earth's greatest champions and villains suddenly disappear, leaving the planet decimated.

Like a rapture, the powers are gone and humanity is left behind to pick up the pieces.  Amongst this wreckage, two lovers, Evelyn and Gil, find themselves separated by a continent and willing to do anything to find each other again.

But when a strange being named 'The Word' turns Evelyn in to a champion with an angelic spear, she finds the force of her love for Gil clashing with her newfound power.

Love and destiny collide in what will become the worse breakup - ever.

As a massive Michael Avon Oeming fan, I have been  reviewing quite a few of his titles for his blog in amongst the other comics and graphic novels as he can always be counted on to give the reader some stunning art and exciting writing.

This title is most definitely no different.

Here he teams up with Taki Soma to create a fast paced, exciting and very touching story amongst all the death and destruction that the leaving of the superheroes and super villains has brought upon the world.

At the heart of all the action and excitement is a love story between two young lovers that have been separated by what has happened.  In the hands of any other writers, this might have come across as a bit cliched and heavy handed but Soma and Oeming are much better than that.  They have given  us a very touching story in which the destruction of the planet almost seems secondary to the love affair.

That's not to say that it's all lovey dovey stuff in this graphic novel.  Far from it.  The rest of the story is very hard hitting and really hooks the reader in.  The only complaint about the story that I had was that I would have liked to have learned a little more about the character named 'The Word' because the character was so interesting.  That's a minor complaint though because the story really gripped me from the very first page right up to the end.  I loved how the ending had a bit of a cynical tint to it and yet seemed hopeful at the same time.

Of course the art work by Oeming is once again spot on for the story.  He really does have a knack for choosing just the right amount of flash and bang for each moment in the story.  It's the same with the characters.  After reading the story you really can't imagine anyone else art work being used for the story.  I've always loved his knack of using shadows and shading to highlight what is happening on the page and he really takes that to another level here.

I would definitely say that if you are a fan of Oeming or Soma then this is an essential purchase for you as both the story and the art is stunning.  I would even go so far as to say that this is one of the best graphic novels I have read in a very long time.  If you like things like 'Powers' or 'Y: The Last Man' then you are going to absolutely love this title.

What are you waiting for?  Go get it and go get it now.  It really is that good.