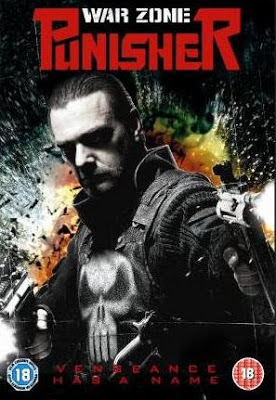 Waging his one-man war on the world of organized crime, ruthless vigilante-hero Frank Castle sets his sights on overeager mob boss Billy Russoti. After Russoti is left horribly disfigured by Castle, he sets out for vengeance under his new alias: Jigsaw.

With the "Punisher Task Force" hot on his trail and the FBI unable to take Jigsaw in, Frank must stand up to the formidable army that Jigsaw has recruited before more of his evil deeds go unpunished.

After the 80's version of 'The Punisher' starring Dolph Lundgren and the version starring Thomas Jane, I wasn't really all that sure about how they would do another movie.

That's when this one dropped on  to my lap.  Is it the perfect 'Punisher' movie?  No but it is a blood good and fun ride though.

Ray Stevenson pretty inhabits the character of Frank Castle.  In my opinion he is a much better fit as the character than either Dolph Lundgren or Thomas Jane.  That's not to say that their versions were awful because they weren't.  It's just that Stevenson gives a performance that closest to the comic book character itself.  Don't get me wrong, it's not perfect but it is pretty close for me as a fan.

The way Stevenson holds himself and his mannerisms really do give a great representation of someone who has lost everything.  Someone who has nothing to live for except for gaining revenge.  A lot of that is thanks to Stevenson's facial expressions.

Story wise, this movie is seriously insane.  I'm really not sure how else I could honestly describe it other than that.  It's violent, bloody, fast paced and with some massively darkly comic moments as well courtesy of the Jigsaw and Looney Bin Jim characters.

Doug Hutchison plays the character in much the same way as he did when he appeared as a different character in 'Give 'em Hell Malone' but here, the character works.  Is he wildly over the top?  He sure is but for some reason, that character fits in with the general crazy nature of the movie and provides some of the movies more comedic (albeit dark) moments.

However, for me it's Dominic West that steals the show.  He looks like he is absolutely loving his role as Jigsaw.  In fact, he looks like he is having the time of his life.  When the character of Billy becomes Jigsaw, he plays it so OTT that you really do believe that it's a different person playing him because of the simple fact that as Billy, he played it in a mean but subtle way.  However, as soon as Jigsaw appears, West kicks it in to overdrive and it makes the movie a hell of a lot of fun.

While this isn't the greatest movie ever made, it is a hell of a lot of fun to watch.  The fast pace of the movie really helped as well because of the simple fact that it didn't give the action a chance to let up.  I did enjoy the quick and crisp flash backs as well as the dark nature of the movie.  The really messed up and sometimes groan worthy humor really made this movie stand out from the other 'Punisher' movies.

Posted by Pat Scattergood at 13:03