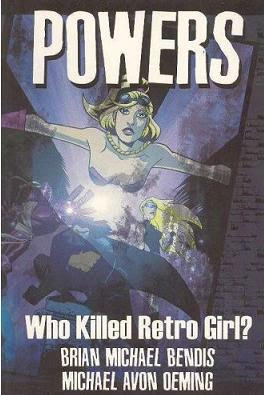 
Heroes glide through the sky on lightning bolts and fire. Flamboyant villains attempt daring daylight robberies. God-like alien creatures clash in epic battle over the nighttime sky. And on the dirty city streets below, Homicide Detective Christian Walker does his job.

Walker has to investigate the shocking murder of one of the most popular super-heroes the world has ever known: Retro Girl. He is teamed up with spunky rookie Detective Deena Pilgrim, and the murder investigation takes them from the seediest underbelly a city has to offer, to the gleaming towers that are home to immortal beings. As shocking, hidden truths about Retro Girl come to light, Walker finds that to solve this crime, he might have to reveal his own dark secret.

Powers is a long running comic book series that deals with Detective Walker. He's a homicide Detective with a difference. He deals with crimes concerning people with superhuman abilities, the group of people known as Powers.

In this collection, he is teamed with an impulsive rookie named Deena Pilgrim to investigate the brutal murder of one of the worlds most loved superheroes. Retro Girl.

The writing for this series has always been one of it's strong points. The story is written in such a conversational style that you feel like you're actually there watching the story unfold. In fact the story itself reads like a classic film noir to such an extent that you expect people like Edward G. Robinson or Humphrey Bogart to turn up.

The artwork completely fits this collection. While it may not be to everybody's taste, I really think that the dark and sometimes unfinished look that the artwork has, really adds to the grimy dirty feel of the city and the story itself. This is most evident when they are questioning suspects in seedy bars. It really makes the scenes come in to perspective.

As well as the brilliant story and artwork, there is still yet more to this collection. There's a sketchbook, the original script for issue one of Powers, the Powers strips, a gallery of unused art and covers as well as a key to the Powers super star cameos. Fantastic.

While the very slow pace of the story may not be everybody's cup of tea, bare with it and you will be rewarded handsomely. It's subtle and shocking in equal measure.

Posted by Pat Scattergood at 12:53