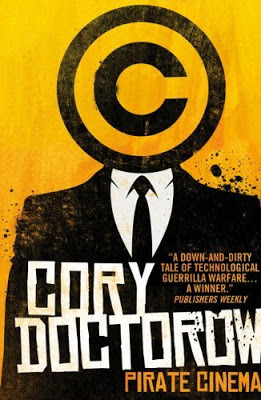 When Trent McCauley's obsession for making movies by reassembling footage from popular films causes his home s internet to be cut off, it nearly destroys his family.

Shamed, Trent runs away to London. A new bill threatens to criminalize even harmless internet creativity.

Things look bad, but the powers-that-be haven't entirely reckoned with the power of a gripping movie to change people's minds...

While I enjoyed 'The Rapture of the Nerds', a book Doctorow co-authored with Charles Strauss, I just couldn't get in to it as much as Doctorow's other books.

He is most definitely back on form with this one however.

Here he tells the story of a young lad obsessed with downloading film clips to make his own movie to spread around on the Internet.  When he gets busted for Internet Piracy, his families Internet is completely cut off and they're left to cope without it.  Feeling shamed he runs away to the bright lights of London but things don't go as well as he had planned.

I loved the simple and fast pacing of the story.  Doctorow gives you enough time to get your head around why he is in London  and to get to know a couple of the main characters but then jumps in to high gear and the story really takes off.

A lot of the story reminded me of the 'Oliver Twist' tale by Charles Dickens but with an up to date and technological feel to it.  There were a couple of times where the story itself felt a little preachy but not enough to take away from the enjoyment of it.

One of the things I liked the most was the intelligent look at the governmental laws.  Instead of just saying 'this is bad but this one is good' Doctorow made sure to get both sides of the story across and that really made the story gel together nicely.

However there was one thing that didn't really work for me though.  The simple and quick pacing was brilliantly done but the sheer amount of drug use and sex just seemed a little at odds with the overall feel of the story itself.  Other than that though, this is a very well written book and an incredibly good read.

I definitely enjoyed this one more than 'Rapture of  the Nerds' and in fact, it actually made me want to look up some of the laws and practices that are mentioned in the book.  The characters are well thought out and the parallels with 'Oliver Twist' are very well handled.  Definitely one well worth picking up especially if you are a fan of Cory Doctorow.

Posted by Pat Scattergood at 12:43