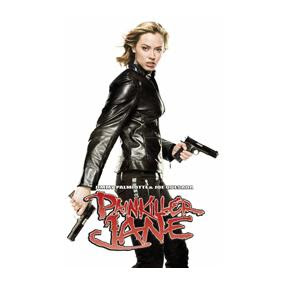 Jane Vasko was an undercover police officer attempting to infiltrate a major New York city drug ring. After gaining the trust of dealers, her cover was unknowingly blown and she was forced drugged into a coma.

Jane remained in secrecy as a Jane Doe until one day she awoke to a world where nothing was the same. Infused somehow during her fitful sleep with strange powers, Jane has nothing left to lose and a whole lot of people to make pay for what they've done...

I wasn't all that familiar with the character of 'Painkiller Jane' other than what I had seen on the television series.  The television was good for what it was but it hadn't made me all that eager to find the comic books.

When I found that they were done by Joe Quesada and Jimmy Palmiotti, I have to admit that it peaked my interest much more and that's when I was lucky enough to find volume one of the characters return that was published by the Dynamite Entertainment company.

While I enjoyed the book itself, for some reason it  just didn't click with me as much as I thought it would.  I suppose I was just expecting a little more when you consider who was involved with the making of the character.

That said, the story here is hard hitting and well paced.  The twist at the end was a bit telegraphed however and that for me, felt a little bit anti-climactic after the action of the previous pages.  The story felt like it was building up to a massive revelation yet when it came it just gave me a 'is that it?' feeling and that's a real shame.  It wasn't a bad ending or one that has put me off of reading more of the character, it's just that after the brilliant writing of the first two thirds of  the story, the ending just felt a little off.

I would definitely recommend this to fans of exciting and fast paced books with blood and wise cracks then you will like this series.  You don't get a whole load of back ground information about the character but you get some flashes of what makes her the way she is and that helps keep the fast pace moving along nicely.

I would even say that if you like comics like 'Kick-Ass' or Mark Millar style stories then you will most likely enjoy this one too, it's just a shame that the ending fell a little flat for me, hence the slightly lower mark than I would normally give for an exciting  story such as this one.  The cover gallery was a nice touch though, I have always been a fan of when comic book companies throw in the other other covers.  It's always nice to see other peoples takes on a character.

Posted by Pat Scattergood at 01:00