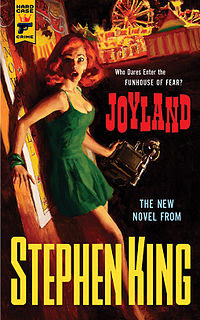 A STUNNING  NEW NOVEL FROM ONE OF THE BEST-SELLING AUTHORS OF ALL TIME!

Set in a small-town North Carolina amusement park in 1973, Joyland tells the story of the summer in which college student Devin Jones comes to work as a carny and confronts the legacy of a vicious murder, the fate of a dying child, and the ways both will change his life forever.

Stephen King is and always has been one of my favourite authors of all time.  However, that said, some of his more recent works seem to be missing a little something.

This book however, doesn't have that problem.  In fact, I would even go so far as to say that this is one of his best stories for a very long time.

The story itself is a relatively simple one but that's part of the beauty of the novel.  There aren't any fancy moments or bells and whistles as the saying goes.  Instead, there are just great characters with some marvelous twists and turns along the way.

One of the main strengths of 'Joyland'  is that it really does come across as a really personal book, one that comes from the heart.  King has created a story that makes the reader really feel like they are part of the world that these characters inhabit.  The descriptions of the carny life and their surroundings feel quite cinematic in their scope yet still retain a rather personal feel.

There is a bit of a ghostly influence to the story yet it doesn't come across as all that important to the main story itself.  In fact, it's used in such a subtle way that it just gently rests at the back of your mind until the story needs it.  I loved that approach because sometimes Stephen King can over do it a little bit but here he is back to his subtle best.

The final reveal as to who the murderer is works incredibly well.  I'll admit that it's not the most original twist in the world but in a master  like King's hands, it comes across as truly shocking and even surprised me.

All in all, if you are a Stephen King fan than you should definitely pick this one up.  It's a deeply personal story with some amazing characters from the subtle beginning up to the heart breaking yet strangely hopeful ending.

If you are a fan of crime stories with a bit of an old school feel to it then 'Joyland' is well worth picking up.

Posted by Pat Scattergood at 13:12