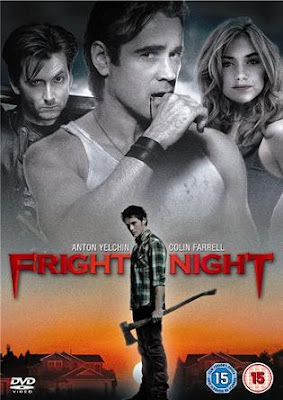 
Meet the sexy new neighbour, Jerry Dandrige (Colin Farrell). He's dangerously charming - and utterly lethal.
That's because he just happens to be a vampire, and out for blood...buckets of it.

After high school senior Charley Brewster (Anton Yelchin) makes the connection between Jerry's suspicious activity and a steadily rising body count, he vows to end the reign of terror next door. But he can't do it alone. His only hope is Las Vegas magician/ vampire-slayer Peter Vincent (David Tennant).

Together, this unlikely duo set out to end Jerry's evil rampage. But Jerry is a ruthless, relentless killer, and he's not going down without a fight. Get set to sink your teeth into this thrilling re-vamp of the terrifying horror classic.

Featuring a star-studded cast and crawling with bonus, Fright Night will captivate you from the very first bite!


Review
The original Fright Night is an absolute classic and has always been a personal favorite of mine so when they choose to remake it, I was highly dubious.

I needn't have worried in the slightest. This is a gory, exciting and a hell of a lot of fun to watch. The humor here is black as night in places and cheesy in others but they gel well.

For me David Tennant definitely gets some of the best and funniest lines of the movie as Peter Vincent. A magician turned vampire hunter. As well as some of the best lines, his facial expressions had me howling with laughter.

Colin Farrell also gives a highly entertaining performance as the next door neighbor. Instead of just being the normal bog standard vampire, he uses some really messed up psychological torment on his victims as well. He really does just exude menace in every scene he's in.

Also be sure to keep a look out for a cameo from Chris Sarandon, the star of the original Fright Night. I thought that was a really nice touch.

The special features, while funny, are a little disappointing and I personally would have liked to have seen a few more things included. That said, when the movie is this good, who cares that a couple of special features are missing?

I'd highly recommend this movie, especially as it's a definite one to watch when you have friends over. Brilliant. It made a nice change to find a remake that was actually good too.
Movie 4/5
Picture 4/5
Sound 4.5/5
Special Features 3.5/5
Overall 16/20

Posted by Pat Scattergood at 14:50