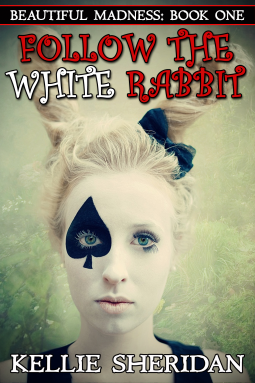 For centuries, Wonderland thrived as the domain of beautiful bedlam and unapologetic madness. It was a place like no other. All it took was one girl slipping in through the cracks of the universe to start chaos spiraling toward order. In the 150 years since Alice’s visit, the realm has become tainted—almost normal. Rabbits in waistcoats and playing card minions are little more than creatures of myth, and Wonderland is literally falling to pieces.
For Gwen, Rose, and Lucky, Wonderland is home, and yet they know little of its former glory. When the Alice prophecy resurfaces, they’ll have one chance to use Wonderland’s own legends to bring a little mayhem back into their reality. For she who controls Alice controls the fate of Wonderland.

Let's get one thing straight.  This isn't a full book, it's a novella to set up the series of books that Sheridan has written.

Now I've got that out of my system let's get to the review properly.

Everyone knows the tales of 'Alice in Wonderland' already and many of us know the tales inside and out so it will take a brave author to take on the challenge of creating a new version of the beloved story.

Well, Kellie Sheridan is that author and this novella is the start of that process but is it successful?

For the most part yes.

I treated this as a taster for the books to come.  Her easy writing style made the scenes feel real, or at least as real as a fantasy novel can get, and the pacing really flowed well.  The way Sheridan set up the world itself is very Melanie Rawn-esque in the that the world seems like a separate character itself.

However that is also one of the problems.  Due to the incredibly short length of the story, it appears to just be getting going but then it ends.  You just get a handle on the characters and then you feel like you have been cut off, so to speak.  That's a bit of a shame on one hand because I really wanted to see more of the story yet at the same time, it set up the world that the books are going to be taking place in really well.

That's why I'm a bit conflicted as to what score to give it.  On one hand, this is a well written and well paced story with a well rounded world for the action to take place in.  On the other hand, just as the story gets going and the characters start coming in to their own, the story stops.

All in all, if you are a fan of the 'Alice in Wonderland' stories then it is worth picking this short novella up as it really gives you a good insight to the forthcoming novels.  I would definitely pick up the following novels if they're going to be as well paced and written as this one.