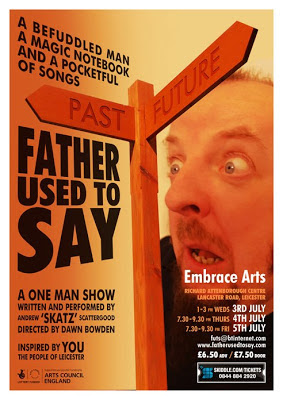 A befuddled man arrives at the crossroads of life with only a magic notebook, a pocketful of songs and the barking of his father to guide him.

'Father Used to Say' is a one man play that has just as much story behind the making and writing of as it does the play itself.

Andrew 'Skatz' Scattergood, who wrote the play and performs all the songs himself, went all around Leicester gathering stories from the young, the old and from pretty much every way of life possible.  It's those stories that have formed the play itself.  It's those words that are used and some of the people mentioned in the play are the real people that told him their stories.  It's a beautiful concept that works amazingly well.

With so many different stories you would expect this play to be rather disjointed but it's not.  In fact, it's the stories that glue the characters life together, much like stories are the glue that binds us all, and it is those words that make this play so memorable.

One of the main strengths of the play is the performance by Andrew Scattergood himself.  I've never been that big a fan of one man (or woman) plays as a lot of the time they come across as vanity projects for those involved yet here it's the complete opposite.  Scattergood gives a wonderfully emotional, subtle and completely unselfish performance as the befuddled man who finds himself at the crossroads of life.  A man haunted by his past, who hears his fathers barking voice at him.  I loved the subtle nuances of the performance and had me both laughing like a loon and sobbing in equal measure.

The songs used here are of so many different styles that it would be honestly impossible to list them all here.  Somehow, despite the massive variety of genres used, they all fit together like a jigsaw.  Each song forms an integral part of the mans journey from being afraid of his past right up to the emotional ending.  I loved the fact that the songs were made up from the real stories that people told Scattergood on his journey and that the words used were the words that were spoken by these people.  Two of the songs 'My Head is Bowed' and 'Next Time You See Me' had me in tears because of how powerful the lyrics were.

Another part I thought was brilliant was the fact that you can take the show on many different levels.  Is he just a man fighting the fear of his past who wants to just get on with his life?  Is he a dying man reflecting on his life before he passes away?  There are many more ways you can take the story but I don't want to spoil anything for the people going to see the show by offering up anymore.

A massively strong and emotional story with some great laughs along the way that had me both laughing and crying and then feeling uplifted when it ended.  I'm honestly glad I got to see it and am definitely going to be seeing it again.

A play that can make an audience laugh, cry and feeling really happy?  What more could an audience want?  Go see it, I'm glad I did.

Buy Your Tickets For The Show Here!
Posted by Pat Scattergood at 12:51