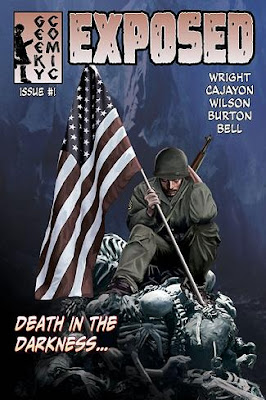 Landing with the invasion force on D-Day, Sgt Jackson and his crew, fight across the beaches and into a cave hidden under the bluff. Inside they are attacked by the Devil Children and uncover the plot of a crazed German Scientist who aims to end the war for Himmler.

The men depend upon each other to keep them alive, one by one they learn each other secrets adding twist after twist to this four part mini series.

I love my war stories.  Give me a story that involves military or a war of some kind that brings out the bravery in the characters.  I'm also a horror nut.  Stories, movies, comics, the works.  I love my horror, the scarier or creepier the better.

This release here from the English publisher Geeky Comics combines the two but does it do so successfully or fall at the first hurdle?

Well, this four issue mini-series is most definitely a successful combination of the two.

The writing by Victor Wright has a bit of a grimy, 80's horror kind of feel to it and that's one of the things that I really liked about the first issue.  There's also a big feeling of claustrophobia that runs through the story and that really combines with the war aspect brilliantly.  However, that feeling is ramped up to the extreme as soon as the soldiers get to the cave.  It's almost as though you are in there with the soldiers because the writing is so well paced and thought out.  You don't find a whole lot out about the characters themselves but because the story itself is so strong and really grips the reader.

Art wise, the issue is superb.  There's a dark, grimy feel to the art and that really combines with the story in a great way.  The feeling of claustrophobia that I mentioned earlier is definitely pushed forward by the art thanks to the masterful use of shadows and angles.  It has a feel cinematic feel to it in that it looks like a dark and gritty horror movie.  The best comparison I can think of is to imagine the movie ''R-Point' but set during World War 2 and you're nearly there.

'Exposed Issue 1 - The Devil Children' is available to buy now from here!
Posted by Pat Scattergood at 13:35