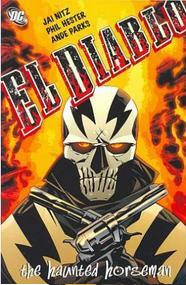 The 6-issue miniseries that reintroduced the haunted horseman of the Wild West is collected!

It's a tale of rebirth, revenge, betrayal, justice, comeuppance and curses as this DC hero begins a new legacy of adventure!

A lot of the time in the recent releases from DC and Marvel, there seem to be a hell of a lot of relaunches and characters being recycled as and when they are needed.  Knowing that this is another rebirth,  of sorts, for the character leaves the reader with a hard task of leaving any notions about the influx of these sorts of titles at the door.

I must admit that when I picked up this title, I did find the write up for it interesting but I was slightly put off by it being a relaunch so to speak.

However, when I did start to read it, I was absolutely hooked from the first page.

There were versions of this character in the 70's and 80's but also a title by Brian Azzarello as well and while this version does owe a bit of a nod to those other versions, this is most definitely it's own character.

One of the things I did notice was that the title did come across with some 'Ghost Rider' style influences yet it used them in such a way that they felt like they were part of the 'El Diablo' character and not the 'Ghost Rider' character.  That's down to the really strong writing by Nitz, who really creates some fantastic moments in these stories.

The way they create a fast paced story all while telling the back story of not only the 'El Diablo' character but also the other people that he comes in contact with, really makes this a gripping read.  I also liked the way the story straddled the line between the real world and the spirit world without the story feeling disjointed at all.  It reminded me a little of 'Shadowman', a title that's published by Dynamite Comics, but with more of a gritty and angry edge to it.

The art for the title really fits the writing incredibly well.  Hester and Parks really do make a great time and compliment each others styles brilliantly well.  The whole story really leaps off of the page thanks to the art here and that just adds to the reasons why it hooked me in straight away.  The brutality of the lives of the characters and in particular the 'vengeance' scenes, are very well drawn.  Your eyes are drawn to every detail in the panels and no matter what is  happening on the page, you just can't take your eyes away from it.

I really wish that there could have been a few more issues of  this title because just as you get really connected to the story itself and to the characters, it seems to end.  In fact, that's the only complaint I really have about this graphic novel.  The ending feels a little bit rushed.  It almost feels like they saw how few pages they had left and realised that they hadn't written or drawn the ending yet so tacked it on.  That's a real shame because that lead me to make it down a little but that said, even with the rushed ending, the art was still absolutely superb.

All in all, an interesting and exciting title to pick up, especially as it's currently quite cheap on certain sites online.  The only complaint, like I said earlier, is that I wished there were more issues because the ending seemed a little rushed.  That said, this is still well worth a read and is a graphic novel for fans of such titles as 'Ghost Rider' and 'Shadowman' because while it treads the same sort of ground as those two titles, it still manages to find it's own voice.