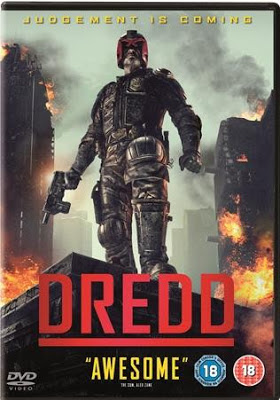 The future America is an irradiated waste land. On its East Coast, running from Boston to Washington DC, lies Mega City One - a vast, violent metropolis where criminals rule the chaotic streets. The only force of order lies with the urban cops called "Judges" who possess the combined powers of judge, jury and instant executioner.

Known and feared throughout the city, Dredd is the ultimate Judge, challenged with ridding the city of its latest scourge - a dangerous drug epidemic that has users of "Slo-Mo" experiencing reality at a fraction of its normal speed.

During a routine day on the job, Dredd is assigned to train and evaluate Cassandra Anderson, a rookie with powerful psychic abilities thanks to a genetic mutation. A heinous crime calls them to a neighborhood where fellow Judges rarely dare to venture - a 200 storey vertical slum controlled by prostitute turned drug lord Ma-Ma and her ruthless clan...

After the Stallone movie 'Judge Dredd' as released, the fans of the character hadn't gotten the movie that they  wanted.  There was a good film fighting to get out but there was so much wrong with the movie that it strangled any of the good parts.

When they announced they were going to have another attempt at the character from 2000 A.D. I was quite hesitant to watch it.

I'm glad that I watched it now though because of the simple fact that we, as fans, have finally gotten the Judge Dredd movie that we wanted and then some.

While I haven't been that big a fan of Karl Urban, he gives the perfect performance as Dredd.  Not many actors would agree to being in a movie where they are in a helmet with only their mouth and chin visible.  The best way to describe the performance is that it was completely unselfish.  He virtually inhabited the character and came across as close to the character in the comics as was humanly possible.

The rest of the cast is very well used.  Lena Headey is superb as Ma-Ma.  It's true that they changed the character quite a bit from the one in the stories we're used to but Headey's performance was mesmerising.  She was just pure and utter evil and the perfect enemy for Judge Dredd.

One of the brave parts of Headey's and Urban's performances was that they played the parts like mirror images of one another in that they were just as violent as one another.  The only difference being that one has a badge of the law.

However, one of the best parts of the movie for me was the casting of the rookie judge, Anderson.   Olivia Thirlby gives a great performance that is the emotional part of the movie, which is the perfect contrast of the emotionless Dredd.  There's a superb scene between the two of them later in the movie.  I won't tell you the lead up to the scene because I don't like spoilers but they're in a lift and Anderson is emotional s Dredd just gives her a look of disapproval and she composes herself instantly.  The scene is so well shot that it perfectly sums up the movie for me.

I'd be remiss if I didn't mention the special effects.  I would have loved to have seen this in 3D and would have bought it on Blu-Ray had I not seen the reviews saying how awful the transfer was for that one and that the scenes were majorly grainy.  That's not the case on the DVD release.  It looks clear as can be and that really makes the special effects come to life.  The slow motion scenes are brilliantly done and are really eye catching without being distracting.

The lack of special features on the DVD release is quite disappointing as I would have loved to see  how they shot some of the scenes or even how they cast the movie but that's a minor complaint.

All in all, I honestly think that while this isn't the greatest action movie ever made, this is the Dredd movie that us fans have been waiting for and it's well worth picking.  It really deserved to do a lot better than it did at the box office but fingers crossed, we might get a sequel.