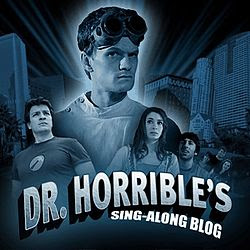 Neil Patrick Harris (How I Met Your Mother) stars as Billy, A.K.A. Dr. Horrible, a budding super-villain whose plans for world domination continually go awry.

His two goals: getting accepted into the Evil League of Evil, and working up the guts to speak to his laundromat crush Penny, played by Felicia Day (The Guild). The only thing standing in his way is Captain Hammer, Billy's superhero arch-nemesis played by Nathan Fillion (Firefly).

With one big score, Billy could get into the E.L.E. and earn the respect of Penny, but only if he can keep her away from the dashing Captain Hammer...

I have to admit that I had a) not heard of this one and b) not seen it before now.  As a Joss Whedon fan and someone with a slight obsession with watching anything the always brilliant Nathan Fillion is in, I just had to rectify that.

That's why when my girlfriend and I saw that it was available on Netflix, that mofo went straight on and you know what?

It was absolutely brilliant!

Considering that it was filmed in just 6 days with a minimal cast, the whole thing looks fantastic.  The songs, yes songs for it is indeed a musical, manage to both be hilarious and touching at the same time.  Believe me they will get stuck in your head.  I will definitely want to try and get the songs on to my iPod at some point.

The cast here is perfectly picked and play their parts as if they are truly having the time of their lives.  Neil Patrick Harris is absolutely spot  on as Billy / Dr Horrible who not only tries to get in to the Evil League of Evil but also to get the attention of the woman he has a major league crush on.  He manages to play the character as both bumbling fool and heart felt loser.

Nathan Fillion is once again hilarious.  He plays the part of Captain Hammer as such a smarmy arse hole but gets some of the best lines.  Just the way he delivers the lines and plays off against Harris as Dr Horrible, had us both in hysterics.  I would love to see the two of them in something together again.

Felicia Day really seems to be popping up a lot in things that I'm watching recently.  First 'The Guild' and then this, it's easy to see why she is getting so popular.  Her easy going performance and 'girl next door' persona in this really makes the character incredibly easy to love and get behind.

There's also an appearance by Simon Helberg, Howard from 'The Big Bang Theory', as a villain called 'Moist'.  It's always great to see such an under rated actor such as Helberg in something other than 'TBBT' and here his charm really helps the rather strange character get some fantastic lines in as Dr Horrible's friend.

One the moments that made me laugh was the inclusion of Jed Whedon as one of the singing horsemen in the story as well so keep your eye out for that.

I know everybody is having 'geek-gasms' over everything that Joss Whedon does recently but don't let that stop you from watching this.  It's hilarious, heart felt and definitely one that is well worth watching again and again so what's stopping you?