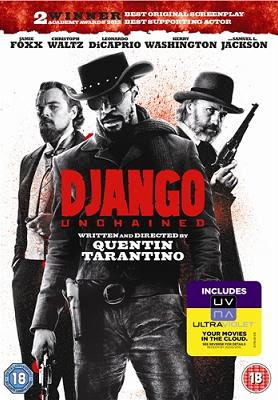 Written and Directed By Quentin Tarantino

Written and directed by Quentin Tarantino and featuring an award-winning cast, Jamie Foxx stars as Django a slave who teams up with bounty hunter Dr. King Schultz (Christoph Waltz) to seek out the South's most wanted criminals with the promise of Django's freedom.

Honing vital hunting skills, his one goal is to find and rescue the wife (Kerry Washington) he lost to the slave trade long ago. When their search ultimately leads to Calvin Candie (Leonardo DiCaprio), the infamous and brutal proprietor of "Candyland", they arouse the suspicion of Stephen (Samuel L. Jackson), Candie's trusted house slave. Now their moves are marked and Candie's treacherous organisation closes in on them.

As a massive fan of all of Tarantino's movies, except for the rather disappointing 'Death Proof', I had massively high hopes for this movie, especially with a cast as brilliantly varied as this one.

And you know what?  This one more than met that hope.  In fact, it surpassed it big time.

'Django Unchained' is pure and utter vintage Tarantino.  It's loud, action packed, bombastic and very well paced.  One of the things that I liked the most was the pacing because even though it's a very fast paced movie, there are still some fantastic character building scenes.  It's those scenes that make you care about the characters and what is happening to them.

That said, the rest of the cast more than hold up their own end of the bargain.  Jamie Foxx gives a great performance as Django and is the great counter foil to Waltz's performance being both a strong action style character but also quite a sympathetic one too.  A lot of his performance isn't just done in the way that he performs his dialogue but a lot of it is thanks to his facial expressions.

I would be massively remiss if I didn't mention the performance by Leonardo DiCaprio.  Once again he turns in another memorable performance.  He honestly couldn't be more of a bastard in this movie if he tried.  I am used to seeing him in quite good and nice roles so this was one of the first that I have seen him in where he has been the complete opposite.

The one thing that disappointed me however is the fact that there is next to no special features on this release and that's a real shame.  I would have loved to have seen some more behind the scenes things but when a movie is as good as this one then that's a minor complaint.

All in all, if you are a Tarantino fan then this is an absolutely essential purchase.  If you want a fast paced and well acted movie then once again this is essential.  How ever, if you easily offended by the 'N' word then I would maybe give this one a miss.

Posted by Pat Scattergood at 13:41