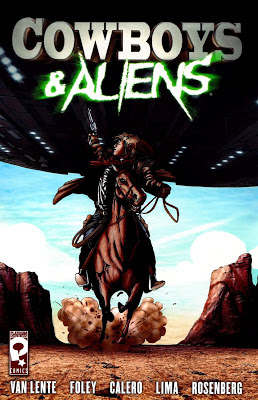 An era when all a man could count on was his horse and his six-gun, and Indians fought a losing battle with European settlers.

Until somebody else entered the fight—an invader who saw all humans as slaves, and was determined to conquer our world.

When I picked this up, I was expecting a fun, albeit a bit cheesy, action with some great writing and artwork.

Despite the fact that I got this title for next to nothing, I still came away quite disappointed with what I had read.  In fact, I think this may be one of those rare titles where the movie adaptation is better than the source material or at least that seems to be the general consensus here.

One of the main problems was the writing.  Considering how much talent the people involved here have, I had very high hopes for the story.  I knew that from the title alone it wasn't going to be the most serious story in the world but the dialogue and the twists were so clunky and heavy handed that I found myself groaning at some of the writing more than once.  That's a real shame because this title really had a chance to be something that was a little different from the plethora of superhero and crime titles that are coming out so regularly these days.

The story itself is an incredibly heavy handed attempt to create a parallel between the plight of the Native American Indians being thrown off their land with the aliens attempts to wipe out the humans and take the planet.  In other hands that would have been a really interesting premise yet here it's done in such a muddled way that it beats the reader over the head constantly with the idea.

The art is very hit and miss, which one again is a shame due to the people involved.  The art just feels rushed and a bit middling when compared to the story itself.  It felt a bit soul less if I'm completely  honest and a lot of the action scenes were just downright confusing in places.

All in all, this was a rather disappointing title.  After hearing a lot about how original and fun this title was, I couldn't help but be a bit disappointed by it.  In fact, I came away with a feeling of 'is that it?' when I finished reading the story.