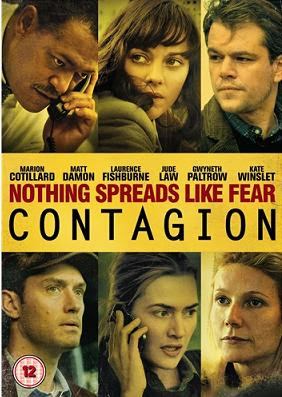 Contagion follows the rapid progress of a lethal airborne virus that kills within days. As the fast-moving epidemic grows, the worldwide medical community races to find a cure and control the panic that spreads faster than the virus itself. At the same time, ordinary people struggle to survive in a society coming apart.

Steven Soderbergh is a fantastic director yet is hard to classify or put in to a genre.  The man can literally turn his hand to any type of story and bring out a good movie.

'Contagion' is much in the same vein as movies such as 'Outbreak' so when I saw the cast listing, the synopsis and who was directing it, I had massively high hopes for this.  It was a 'can't miss' movie so why did I come away from the movie feeling a little disappointed?

The cast is a veritable whose who of Hollywood.  You have the 'old hand' in the shapes of Laurence Fishburne and Elliott Gould but you also have people such as the brilliant Matt Damon and Marion Cotillard.  Yet with so many characters playing integral roles in the movie, there just wasn't the time to develop most of the characters to mere 'name and job title' status only and that's a real shame.  With the talent involved, the characters could have been massively memorable yet when the end of the movie came, I found I couldn't remember a lot of them.

That's not to say that the characters and the performances are bad, far from it.  There are some absolutely brilliant performances here.  Matt Damon in particular, is superb as the heartbroken father and husband.  It was also great to see Elliott Gould on the big screen again.  He's an absolutely fantastic actor who gives an air of class to any part he plays.

The problem was mainly with the writing.   There are a couple of characters that are brilliantly written but for the most part, the rest of them are quite unlikeable.  With Jude Law's character of Alan Krumweide, a blogger who uses the outbreak to further his career and make money, that's fine.  He was meant to be unlikeable, although Law's  performance did veer in to melodrama on more than one moment.

There were however two parts of the movie that were done very well.  The first is the who look the movie.  It just looked grimy and like it had lost color if that makes sense.  That really added to the feel of the movie and was superbly done.

The other thing that was really well done was the fact that thanks to the slow and deliberate direction by Soderbergh, the movie really does get under your skin so to speak.  The nature of how they show the virus spreading was done in such a way that you do feel like you want to see the movie out to the end to see if it can be stopped at all.  That's why Soderbergh is so renowned as a director, no matter the movie he always manages to get a really good atmosphere to jump off the screen at the viewer.

While disappointing in places due to the lack of character development and a couple of the performances being poor, Jude Law I'm looking at you sir, I did feel a little like this movie was a bit of a missed opportunity.  Kind of like they could have done so much more with it.

That said however, it's not a bad movie by any stretch of the imagination.  Just be prepared to want to wash your hands.  A lot.

Posted by Pat Scattergood at 01:08