Buffy the Vampire Slayer: Once More With Feeling DVD Review 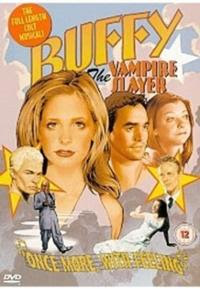 Written and Directed By Joss Whedon

The vampire hunters from Sunnydale find themselves in the world of musicals - a very special episode, featuring the hit 'Walk Through The Fire' in which the stars prove their talent for singing and dancing impressively. During a visit to the graveyard, Buffy suddenly feels the urge to sing. A supernatural power plays a trick upon her and her friends, as suddenly they all begin to sing and dance. Soon the whole of Sunnydale is struck by musical fever...

As someone who wasn't that big a fan of the 'Buffy the Vampire Slayer' series, I'd never gotten around to seeing this episode despite all the good things that have been said about it.

After seeing it mega cheap in a second hand shop, I decided to give it a go to see if it was as good as all the fans of the show had made out.

I have to admit, while it wasn't as good as the fans have said it is, it's still a really enjoyable and quite camp episode of a much loved series.

Growing up, I had caught the first two series of the show and then a few episodes here and there so I wasn't completely lost with some of the things and secrets that were revealed during this episode.  However, if you have never seen an episode of 'Buffy' show then you might be quite lost during certain places.

That said, there are some absolutely brilliant songs during the story itself.  The best of these, in my opinion, was the one sung by the vampire character Spike, played by James Marsters.  His ticked off, cynical character gets nearly all of the funny dialogue.  Joss Whedon always has been brilliant at giving his characters full personalities no matter how small their part is and it's easy to see why Spike was one of the most popular characters from the show.

The cheesy and camp nature of this episode really makes it a hell of a lot of fun to watch.  The songs are all incredibly well suited to the characters that sing them and are a varied bunch of genres to choose from.  The song that the character Xander, played by Nicholas Brendon, and his wife-to-be Tara, played by Amber Benson, is absolutely hilarious in it's classic musicals style.  Some of the other songs were really heart felt and were most definitely written to their characters personalities.

That personal touch to the writing and the cheesy songs really combine to make this an episode that is a blast to watch.  I will admit that it's not as good as the mass of hype made it out to be but that's probably just because I'm not a hardcore 'Buffy' series fan.  That said, watching it has made me want to check the series out again to see if maybe I've missed anything.

All in all, if you are a diehard 'Buffy'  fan then you either will love this DVD or already own it, so what ever rating I give it will be a moot point.  If you're not a fan or you've never seen an episode before then you might find yourself a bit lost here and there but keep on watching it, even if just for the songs themselves.

Posted by Pat Scattergood at 11:53