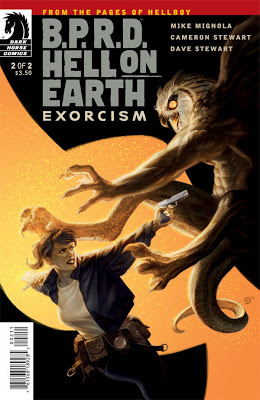 Field agent Ashley Strode attempts to purge a demon from a 100-year-old exorcist, utilizing a deadly rite that sends both of them into a spiritual hell.

After the excitement and reveals during the first issue of this two issue story arc, it was going to be a tough act to follow.

Did this, the second and climactic, issue live up to the excitement of the first?

The story itself is still well written and fast paced with some good pointers to what is going to happen next in the series.  For some reason, this issue just didn't fly as high as the first.  It's not that it was a bad issue, it's just that while the story was exciting and well written, the ending and the last couple of pages just fell a little flat for me.

However, that said, in Ashley Strode we have a great newcomer to the 'Hellboy' canon and a character that is quickly growing on me.  The ending did feel like it was tacked on at the last minute, Strode's character still came across as one that is going to play a major part in the stories for a long time.

The art however, is absolutely brilliant and lives up to the high expectations set by the first issue.  Then again, what else would we expect from the fantastic Cameron Stewart?  One of the strongest moments of the issue art wise was the scene where Strode starts to lose it and Stewart ramps that home by making the walls close in, creating a complete mind fu*k for the character.  Another brilliant point of his art work was the Andras demon.  It was one of the best looking demons I've seen for a long time.  I think the point that they were putting forward there was that not all demons are ugly or nightmarish.

All in all, this is still a fantastic issue and one well worth picking up.  I'll definitely be grabbing some more issues of B.P.R.D. if they're going to be this good.