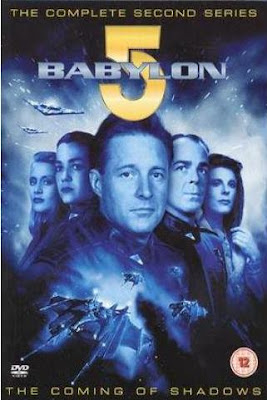 This DVD release features the complete second series of Babylon 5.

While the first season of the 'Babylon 5' show introduced the characters and the machinations of the station and it's enemies, it's the second season where everything starts to fall in to place.

The new opening credits voice over really makes a difference to the stories in that it foretells some of the darker stories that will heading our way.

Writing wise, the stories are still as multi layered as the first season but it's almost as if the makers of the show have a new found confidence about the show.  The stories all start to link to  one another through out the season and it's that intelligent writing that really marks this season out as one of the best seasons of television science fiction of that decade.  You can watch the stories on their own, you can watch them one another.  Either way, you are kept completely enthralled by the stories themselves.  They also hold up to repeated viewings in that this show really rewards the viewer who watches it more than once.  Each time you notice subtle little nods and hints to other stories, subtle little chances of character in the people involved and much more.

The characters here really start to become even more memorable and interesting.  I really liked the addition of a new person in charge in the shape of the criminally under rated actor, Bruce Boxleitner.  He really gives the character of Sheridan, who replaces Sinclair, an air of grace and strength that was missing slightly from that character.  He has this calm but strong feel of authority without slipping in to melodrama.  I also like how the character of Garibaldi continues to grow as well and we get to see more layers of his character.

One of the things that bothered me the most however was the slightly fuzzy in places transfer.  One some episodes, it wasn't that bad but on others, it seemed like there was a sort of film over the sides of some of the scenes.  It doesn't make it unwatchable, far from it.  It's just down to the age of the film but I really think Warner Brothers could have done a little bit better with the transfer if they had just put a little bit more effort in.

All in all, season 2 is the season that kicks off all the puzzle pieces falling in to place.  There are hints and nods to the darker stories as well some as brilliant twists and turns.  Couple that with the superb writing  and performances and you have a seasons that not only stands up to repeated viewing but also rewards the viewers who do that.

Posted by Pat Scattergood at 13:41