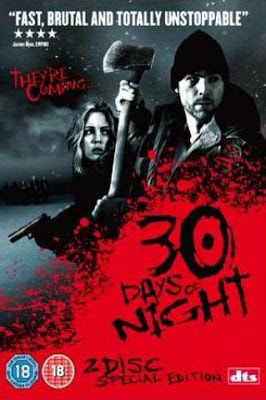 Written By Steve Niles, Stuart Beattie and Brian Nelson Based on the Comic Book Series By Steve Niles and Ben Templesmith
Directed By David Slade

In a sleepy, secluded Alaska town called Barrow, the sun sets and doesn't rise for over thirty consecutive days and nights. From the darkness, across the frozen wasteland, an evil will come that will bring the residents of Barrow to their knees. The only hope for the town is the Sheriff and Deputy, a husband and wife who are torn between their own survival and saving the town they love.

For decades the vampire movie has pretty much had its fangs blunted by inept writing and bad movies.

To be perfectly honest, I became pretty embarrassed to be a vampire movie fan after the sheer deluge of awful offerings in recent years.

That's when I found this movie.

Based on a cult graphic novel series by Steve Niles and Ben Templesmith, this movie takes a very interesting premise and does something truly amazing with it.

The idea alone of there being 30 days and nights in a row of just pitch darkness ramps up the pressure and the direction and writing just further pushes that level up.

The direction is masterful and offers up many new and interesting things for the vampire fans that are still among us. The grainy and dark shooting style really works wonders for the movie because the director, David Slade, uses both the darkness and shadows as if they were characters themselves to bring the suspense to the forefront. There is a feeling of unadulterated dread throughout the movie that works in such a great way that when the shit hits the fans you can't help but jump.

That's yet another thing that is absolutely fantastic about this movie. The jumps and the scares actually work and that seems to be a rarity for horror movies these days.

The writing itself is intelligent yet incredibly nihilistic in it's approach but finds room for fully fleshed out characters that are really brought to life by the cast. Josh Hartnett, in particular really surprised me with his subtle yet strong role as the town sheriff. Melissa George gives her normal high standard performance but there is one cast member that really stands out for me.

Danny Huston as the vampire clans leader, Marlow, is slow, methodical and very scary in that he is a very intelligent character. He's a fully fleshed out character with a reason for every single action and reaction he makes in the movie and Huston's performance really hammers that home.

The special features are absolutely fantastic, my favorite being the commentary track in which Hartnett himself gives a fantastic run through of the movie, even going so far as to explain which parts he felt worked really well and which parts could be improved upon. That, for me, is a welcome breath of fresh air in a land of commentaries that just spend their time saying how good they think they are.

This is a real vampire movie, none of that sparkly crap here guys and girls!

Posted by Pat Scattergood at 03:56