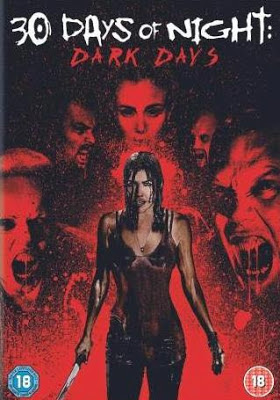 Almost a year has passed since Barrow Alaska's population was decimated by vampires. Stella, mourning her husband's murder, has been travelling the world trying to convince others that vampires exist. When a group of lost souls offers her a chance to exact revenge upon the vampire queen, Stella joins their mission to stop evil from striking again.

Is this, the third release in the '30 Days of Night' mythology, as good as the modern classic original?

No. It's not a patch on that one but what we do have here is a very good vampire movie.

You can clearly tell that the budget for this one is a lot lower than the original but that has just made the director, Ben Ketai, more sensible with his choices of scene.

The direction really lends an air of dread and claustrophobia to the entire movie. He shows a really deft hand at using his budget well and using subtle shots to his advantage. There are absolutely brilliant action sequences that wouldn't look out of place in a movie with a much higher budget.

The writing is very faithful to the graphic novel that it is based on and that may be in part to the fact that Steve Niles, who along with Ben Templesmith, created the '30 Days of Night' graphic novel series has co-written the movie alongside Ben Ketai.

The characters themselves are well cast. The best of these being Mia Kirshner, from 'The Crow: City of Angels', who gives a wonderfully evil yet subtle performance as Lilith, the vampire queen.

Unfortunately, Melissa George hasn't returned to reprise her part but Kiele Sanchez gives a more than adequate attempt at the character.

The movie itself follows straight on from the original and shows just how much aftermath has been left behind. The whole affair was covered up and yet history appears to be about to repeat itself again.

There seems to be a sense that the whole affair may be unstoppable, that if you stop one clan from trying to replicate it then another will just rise up in it's place. I like that because normally it's the 'All American Hero' that saves the day and you never hear from the villains of the movie again.

I also liked the open ending in the hope that it will mean there will be another movie. In fact, I would really like to see more of the characters back stories or maybe even see it from the vampires point of view too but we'll wait and see.

The special features for a low budget movie are pretty good, although the commentary isn't as good as the brutally honest Josh Hartnett one from the original movie but that's a minor quibble. It did seem to give more props to the graphic novels than that one did so it sort of evens out in that respect.

While this sequel doesn't have the subtle, nihilistic attitude of the first movie, instead going for an 'Underworld' feel, the movie works. In fact, even though you can see the 'Underworld' influence, it works a hell of a lot better than that piece of dross directed by Len Wiseman.

Posted by Pat Scattergood at 05:25