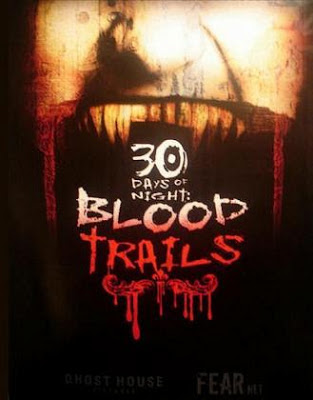 
30 Days Of Night: Blood Trails are 7 short episodes based on the New Orleans storyline from the original graphic novel 30 Days Of Night. BLOOD TRAILS follows George, the young addict, who makes a living seeking covert information for Judith, the weary but wise New Orleans vampire hunter.

Ready for a change, George plans to score one final job before he can leave town, but finds the road to salvation quickly crumbling when his contacts start turning up dead. Now George must dodge vampires while navigating the harsh underbelly of New Orleans to get his last payday and make it out alive.

Review
Let's get one thing straight. This is not a movie it is a mini series that was released on the web site promoting the original and brilliant movie '30 Days of Night' starring Josh Hartnett and Melissa George.

What we do have here is a fast paced, albeit short, collection of 7 mini episodes that form a prequel to that amazing movie.

Is it as good as the original movie. Not even close. However considering it's low budget and short run time of 39 minutes, it's a very good addition to the saga and adds a hell of a lot to the story.

The secret of the vampires plan comes clear and also the brave effects to stop it from happening are also shown. The writing gives quite a few nods to the original graphic novel series, which I was very impressed with.

While some of the complaints about this release being short are true and yes I do agree that it would have been better to have put it on as a special feature on either the original movie or the sequel movie called 'Dark Days', I still felt that this is well worth picking up.

If you can handle the fact that the episodes are separate and have to be watched one by one and can handle the short run time of 39 minutes, then this is most definitely a good purchase. Especially considering it's cheaper than buying a tub of popcorn from the cinema.