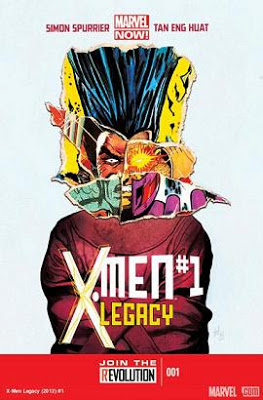 Marvel Now! spotlights Legion— the most unstable mutant in the world and Professor Charles Xavier’s son! Legion has reshaped the universe and killed gods – now, in the wake of AVX, he must conquer his demons and embrace his father’s legacy!

After the good but not great issues of Avengers vs X-Men, we have been left with the most unstable mutant in the world and he goes by the name of Legion.

Full of demons and issues, Legion has to conquer those and live up to his fathers, Charles Xavier's, legacy but can he do it?

In this, the first issue of the new run of 'X-Men Legacy', we are pretty much reintroduced to the interesting character of Legion.  As Charles Xavier's son, the character has a hell of a lot to live up  to in the comic book world but this issue goes a very long way to establishing him.

With enough of the back story to introduce the character to new readers, but enough  'sizzle' to keep the long time fans more than interested with the story.

Story wise, it's well written and manages to both be character development heavy while still being fast paced and exciting.  I haven't read a whole load of Spurrier's work but if this is anything to go by then I will be reading a hell of a lot more.  I loved how Spurrier tackled the mental parts of the story with what was going on in the real world as well.  He balanced it really well and really made the story memorable.  In a sea of reboots and reimaginings, this is definitely a great first issue.

The art here has a sharp and angular feel to it and that really works for the story.  In fact, when Legion uses his powers, the art really makes the action and then what happens after really jump off of the page.  I'd even go so far as to say that it's the sort of art that really hooks the reader in to the story.

I'd really be remiss if I didn't mention the cover.  It manages to both be simple in it's execution but massively effective in showing the sheer chaos that goes on in Legion's head.  A superb cover.  Truly superb.

I, for one, will definitely be following this title closely and picking up issue two.