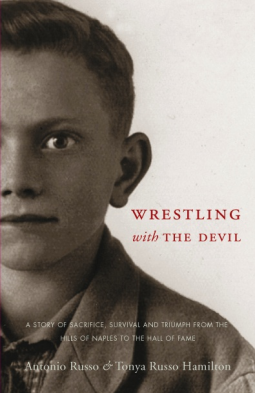 Plucked from his beloved Italian country-side, severed from his family, and placed on an ocean liner in the bay of Naples, Antonio Russo, just ten years old, embarks on the journey of his life.

As he steps foot onto New York soil with not a word of English, his pockets stuffed with salami and provolone cheese and wearing a pair of shoes for the occasion, Antonio recalls the promise from his mother that in America he would find family members to take care of him and the trees blossoming with gold.

This young Italian boy finds himself hit hard with a large dose of reality, obstacles at every turn. These obstacles would become the demons with which Antonio finds himself doing constant battle, but as fate would have it, he one day comes to realize that he is good at something. He finds by chance that he has a natural instinct and ability in the sport of wrestling.

As his story unfolds, it would be the sport of wrestling that ignites a passion and guides him to the realization of his true potential, giving meaning to the struggle he and his family would endure in their journey from Southern Italy to the United States to create a better way of life.

This one is neither of those things.

This one is great.

If you are a wrestling fan then chances are you know the name Antonio Russo very well.  The legendary fighter from Naples had a natural affinity for wrestling along with a cool 'don't mess with me' attitude before it was cool yet he always came across as a very private man.

Here is his long awaited autobiography written with his daughter Tonya and it's one of the best written autobiographies that I have read in a very long time.  In fact, it had me in tears more than once but let's not get ahead of ourselves here.

Russo's life started as a  youth in Naples, Italy until at age ten, he embarks on a journey that will both change his life as well as shape the man we all know today.

One of the main strength's of this book is that it manages to be so many different types of books at once and yet doesn't feel disjointed once.  That is the mark of the very good writer and Tonya Russo Hamilton is definitely one of those judging from this book.  The way she writes about her father's experiences feels so warm and honest that you feel like you are involved in his life from the very beginning.

Her simple but descriptive writing style really makes Russo's life story fly off of the page in a massively cinematic way.  It honestly was just like watching a movie but I've sidetracked again.

This book manages to be a look at the social history of the era, a look at how the family unit works together, a wrestling autobiography as well as a look at the immigrant experience but told from an intensely personal point of view.

The hardships that Russo went through to become who he is today are absolutely heart breaking.  I'm not ashamed to say that reading about those and about the personal demons he had to fight with had me in tears more than once yet even after all of that, this is a story of hope and hard work.

Once in a while however a book comes along that absolutely touches you.  This is one of those books.  As soon as I finished it, I flicked it back to the start and read it over again.  It really is that good.
In fact, I'm going to give it a score that hasn't been seen before in the book section of this site and it deserves every single point of it.

Posted by Pat Scattergood at 12:45