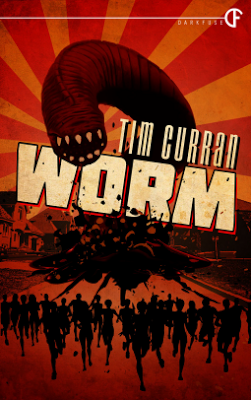 On Pine Street, the houses begin to shake. The earth begins to move. The streets crack open and yards split asunder...and rising from subterranean depths far below, a viscid black muck bubbles up and floods the neighborhood.

In it are a ravenous army of gigantic worms seeking human flesh. They wash into houses, they come up through the sewers, through plumbing, filling toilets and tubs, seeking human prey.

Cut off from the rest of the town, the people of Pine Street must wage a war of survival or they'll never see morning. As bad as the worms are, there's something worse—and far larger—waiting to emerge.

This is a book, well a novella, about giant human eating worms that come out of the toilets to terrorize a small town.  It's not going to be a world beater of a book is it?  So, why did I end up being disappointed by it?

Normally, I love things like this.  Creatures, zombies, aliens, anything like that normally makes me jump at the chance to read it or watch it but here, I just couldn't get in to it.

The short length of the story is both it's biggest strength and it's biggest weakness.  Well let's start with the positives.

The fast pace of the writing really moves the story along at an absolutely cracking pace, jumping from scene to scene with such abandon that it doesn't really give the reader a chance to stop and relax.

For me, that's pretty much it.

Some of the humor that runs through out the story really feels at odds with the rest of the writing.  Some of it is darkly comedic and that works pretty well in a 'Tremors' kind of way but the rest of the humor just falls really flat as if it was put in at the last minute.

All in all,  even with the short length, I wasn't all that impressed with the story.  It seemed repetitive in places and sometimes even boring.  Maybe we've just been spoiled with man eating worm goodness by the 'Tremors' movies or something but I just couldn't get in to this story at all and that's a real shame as it sounded definitely up my street.

Posted by Pat Scattergood at 13:58