Where the Witches Lurk Issue 2 Review 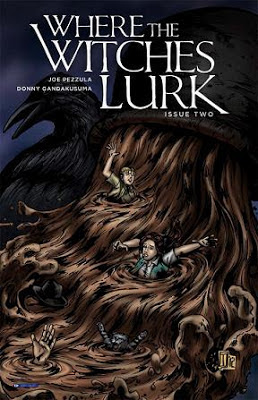 Issue 2 reveals a new darkness rising in the town, as the girls rethink their tracking strategies and the local police start to suspect evil forces at work. Gregory faces an unexpected, thrilling new danger while trying to protect his daughters as Darkness Rises!

The first issue of 'Where the Witches Lurks' set the tone brilliantly for this series.  While there wasn't a lot of character stuff, there was enough to make the characters mysterious and also make the reader want to get to the 2nd issue.

Here Pezzula most definitely doesn't disappoint.  The feeling of dread set by the superb first issue comes to the forefront of this issue with a large bang.

Instead of feeling the dread, you flat out see it here.  There's a great flashback story told about an entity the girls and their father have battled once before with out success and in this story that entity comes back with nothing but revenge on it's mind.

The story moves along at a slightly quicker pace than issue one but that doesn't affect the atmosphere at all.  Instead we get an exciting story, some great character development and the emergence of a key creature in the story.  We also get a couple of twists too that made me very eager to get my little mitts on to issue three so hopefully that will be out soon.

Once again, the artwork is superb in this issue.  Once again the art really keeps the tension and dread of the story going, even ramping it up with his great use of shadows and darkness.  One of the things I really liked was how he illustrated the creature, if it is a creature, called 'The Darkness' in such a way that it honestly looked like something that would quite happily be in a classic horror movie.

All in all the team up of Pezzula and  Gandakusuma have once again crafted a superb issue that makes me, as the reader, want to start straight away  on to issue 3.  The story is of a quicker pace than the first issue but that doesn't mean it isn't as gripping, far from it.  I'm eager to see if they can keep this pace up for issue 3 because I want to know what happens next!