Where the Witches Lurk Issue 1 Review 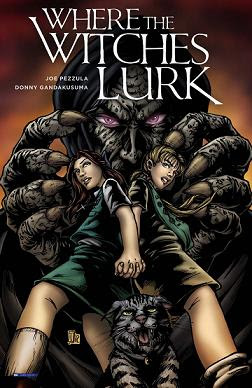 
In the quiet suburban town of Haslow Falls, Gregory and his daughters, Tina and Gina, utilize decades of training and new abilities to track and eliminate evil witches. A new friend and an ancient enemy throw their world into turmoil, as the girls must figure out how to rescue their father while evading capture from both the local police and a powerful sorceress.
Issue 1 introduces us to Gregory, Tina and Gina as they try to turn the tables on an old suburban witch on a quiet neighborhood street just like any other.
Review
The first issue 'Where the Witches Lurk' is a bit of a weird one to review in all honesty.  In fact, I would even go so far as to say it's a bit of an enigma.

If you just flick through it then you might go away thinking that not a whole lot has happened in the story and that not a lot of it really makes all that much sense.  That would be a real shame because there are loads of subtle little hints and nods to the next issue, the ending gives you an uneasy feeling of dread and you get a glimpse of the relationship between the two girls and the father as they hunt witches.

I loved the feeling of dread that the first issue gave.  Pezzula's writing really gives an uneasy feeling to the reader but in a good way.  It really makes the reader feel like something bad is coming towards the characters and I loved that.  The fact that you get a glimpse of what the two girls are up to and that you are given a flash of the danger in front of them without the writing going over the top really makes the first issue have a lot of impact.

Artwise, there was a great old style horror movie feel to it.  I loved how Gandakusuma balanced a quite detailed style of drawing with leaving some of the action to the imagination of the reader.  I especially liked the drawing of the witch and the use of the shadows to make the scenes have a 'not quite right' feel to it to add to the dread that the writing does so well to put across.  I wasn't all that familiar with Gandakusuma's work before seeing it here but it's made me quite eager to see the next issue to see if he can keep up this quality.

All in all, this is a good title to pick up but only if you're quite a patient reader.  The story isn't really told here all that much but there are flashes of the characters and of the forces they are fighting with and that leads to giving the reader a real feeling of dread in that you know there is something majorly bad on the way but you're not quite sure what.  I think that really raises the quality of the title because most writers this way throw so much at the reader that the subtle points of the story is lost but that's not the case here.

Personally, I can't wait to read the 2nd issue!