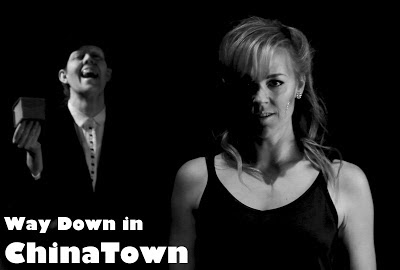 Victor and Jessica just want to make a good play but when temptation calls, their lives will never be the same.

'Way Down in China Town' is one of those rare movies that is nearly impossible to label as any particular genre or type of movie.  In fact, the closest genre it can be classed as is science fiction but even then, it doesn't really fit that.  There are flashes of film noir, flashes of comedy and pretty much everything in between.

Normally that would make the movie an incredibly disjointed and a bit of a mess yet that's not the case here.

Story wise, the main couple of characters appear to be wanting to create a play and make it the best that they possibly can.  While auditioning people, something appears to get under their skins and all sorts of craziness that you can't really explain starts to happen.

If that sounds confusing that's simply because it is but that doesn't mean that this is a bad movie because it really isn't.  'Way Down in China Town' is a confusing, unsettling but enjoyable movie and it's utterly unique.  The best and nearest comparison would be the movie 'Dark City' but even then, that movie is on completely the other end of the spectrum.

Cast wise, they do a fantastic job.  While the story itself is quite unsettling in a confusing way, I really liked how the cast delivered their lines and portrayed their characters.  I loved how confusing the movie was because of the simple fact that the cast make it addictive to watch.

All through movie some really weird characters turn up throughout the movie and there are also some familiar faces here too.  My personal favourites are Lisa Loring (from television's The Addams Family) and the horror legend known as Maria Olsen, the hardest working woman in horror today.  I have to say that I loved the character called Bob.  In any other hands the character might not have worked as well as it does here but in Olsen's hands, the character is completely memorable and very interesting.  I would have definitely loved to have seen more of Bob, even more so than the two main characters in fact and that is purely down to Olsen's performance.

On the other hand, it was fabulous to see Lisa Loring on the screen again as she really is an incredibly under rated actress.  Hers was another character I would have loved to have seen a bit more of.

I would be remiss if I didn't mention the superb make up work used here.  It reminded me of the old silent movies such as 'Metropolis' and 'Nosferatu' mixed with a little bit of Tim Burton style strangeness.

One of the things that I really liked the most about the movie is that it didn't feel at all like a movie and I mean that in a nice way.  It felt a lot more like a stage play than a movie and the superb cast acted it as such.  The charisma between the various cast members, even the smaller parts, really flies off of the screen.  Because of the level of charisma shown here, I could easily see this being performed on the stage.

All in all, I don't really know how else to describe this other than weird but I'm completely OK with that.  While the story itself is very strange and has an unsettling feeling running beneath the surface, the cast do such a superb job with their characters that they're instantly memorable.

I won't lie, this movie won't be to everyone's liking, I really liked it.  Definitely one to put under the banner of 'so weird it's good' for the movie fans out there.  Sit back, stick your feet up and watch a very charisma driven cast with some fantastic make up that harks back to the golden age of Hollywood.  You never know.  You might enjoy it.