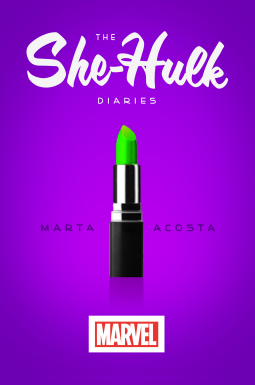 JANUARY 1
CURRENT STATUS: No job, no boyfriend, no permanent place to live, no car, and most of my clothes are held together with staples and duct tape. Bank account almost wiped out. Many of my former associates have expressed a desire that I never darken their doorways again for legal and financial reasons.

She-Hulk got us got us kicked out of the Avengers Mansion. People keep posting videos online of her New Year's Eve shenanigans: twirling, flaming telephone poles in Times Square, climbing the Empire State Building while dangling Anderson Cooper, dancing wildly at parties, and commandeering a motorcycle cop's ride to do wheelies across the Brooklyn Bridge.

Saying there are two sides to Jennifer Walters's personality is an understatement. When she hasn't morphed into a 650-pound, crime-fighting, hard-partying superhero, she's a single lawyer trying to get her act together. Hilarious and action-packed, The She-Hulk Diaries tells her story, as she juggles looking for Mr. Right and climbing the corporate ladder by day with battling villains and saving the world by night. Maybe she'll finally take on a case that will define her career. Maybe she won't meet one Mr. Right, but two, and she'll have to choose. Maybe bad guys will stop trying to destroy the planet so she can read her Perez Hilton in peace.

That might sound a little harsh but it's most definitely true in this case.

I've never been that big a fan of the She-Hulk character itself if I'm being completely honest.  It's a character that  has a lot of promise if it was written right but at the moment is little more than 'Sex and the City' but with a green lady.

That's a pretty good way of looking at this book but I for one, was left wondering why Marvel thought this time up would be a good way of getting in to the female market.  The story is incredibly lame and as brutal as it sounds, badly written.

The story doesn't really seem to go anywhere and the fact that the underlying moral of the story seems to be that you need to be in love and have someone to be happy is incredibly badly chosen in a really cliched way.  That seems to be the general point of this book.  Be as cliched as possible.  If that was the point of the book then they succeeded tenfold.  If the point of the book was to write a good story that would hook in the female readers out there then they failed miserably.