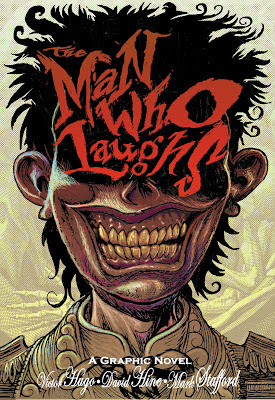 
Published By Self Made Hero

London 1705.  As a surrogate family of strolling players enact their nightly performance of Chaos Vanquished, a message in a bottle, washed up after years at sea, threatens to bring chaos once again to their lives.

To the aging quack in charge of the troupe; to its blind and beautiful leading lady; and to Gwynplaine, the virtuous young actor whose inner nobility is masked by the mutilated face by which a grotesque, perverse, and corrupt society society defines him:

"The Man Who Laughs".

In David Hine and Mark Stafford's adaptation, Victor Hugo's impassioned, outrageous, and bizarre 19th century novel - the inspiration behind The Joker in Batman - has found an ideal new form.

The novel 'L'Homme Qui Rit' By Victor Hugo, the novel that is the source material for this rather unique graphic novel, is a call to arms for  the downtrodden of the era.  While the novel itself is quite rambling in places, Hugo had written a highly charged and satirical indictment of the way the country was run.

Here David Hine and Mark Stafford have adapted that book and given it just as much, maybe even more, impact.

Hine's writing is definitely one of the main strengths of this release and you can tell how passionate he was about the project just by the sheer skill in which he adapted the story.  He 'trimmed the fat' of the novel yet hasn't lost the important message that Hugo set out to spread to his readers.  If anything, Hine's writing has made this a more concise and powerful story.  The way he wrote the relationships between the characters  is positively masterful.  You really do get sucked in to their lives and tribulations.  They honestly feel like real people and that you are watching the whole story unfold before your very eyes.  You get majorly involved with them on an emotional level and that's what really raises the quality of this graphic novel.

The art work by Mark Stafford is perfect for this  release.  Stafford has created a style for this book that, and I mean this in the nicest way possible, doesn't look normal or right but that's perfect for this story.  It adds an air of Gothic grandeur to the story and really pulls your eyes on to the artwork.  There are some really dark and disturbing moments but with the unique art style, the impact really hammers home what happens to the various characters.  In fact, the images really stay in your head long after you have finished the graphic novel.

I have to admit, Self Made Hero have been slowly but surely carving out a name for  themselves for doing unique and fantastic graphic novels that are as eclectic as they are awesome.  This most definitely is one of the best of those and that is saying a lot.

I'd even go so far as to say this is a positively essential purchase.

Posted by Pat Scattergood at 11:32