Tales From the Cobra Wars: A G.I. Joe Anthology Review 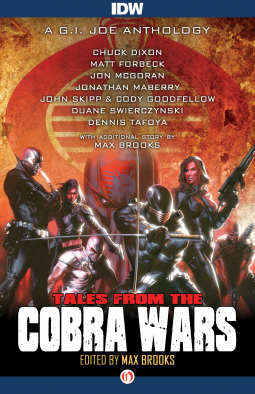 As a G.I. Joe fan, although not so much of the first live action movie, the idea of a series of stories from the Cobra Wars filled my geeky little heart with glee but did it live up to the expectations?

Yes, they most definitely did.

While it is true that I  liked some stories more than others, I can honestly say that I don't think that there is a  bad story amongst them.

The stories themselves really do a fantastic job of fleshing out key moments from the Cobra Wars themselves, even going so far as to giving some of the lesser known characters much needed back stories.

It was great to see Chuck Dixon, famous for comics and not novels, add his own story to the collection with a Snake Eyes story and, for me, it was one of the highlights of the book itself.  Maybe that's just the Dixon fan inside me but this was the story that I was most excited about and it delivered in spades.  It's left me wanting him to write more of these stories instead of just sticking to comic books.

Another great addition was a Max Brooks story.  Famous for his zombie stories above all else, he seemed like a strange choice to a) write a story for this collection and b) to be the editor but his writing style really suits the collection well.

If you are a G.I. Joe fan of either the live action movies, the cartoons or the comic books then this is definitely a book that you will want in your collection.  Even if you're not a fan, pick it up.  The stories are fast paced and written in such a way that even  if you know nothing about  G.I. Joe then you can still follow the stories and characters.  That's a testament to the great writers here so pick it up.  You won't be disappointed.

Posted by Pat Scattergood at 10:48