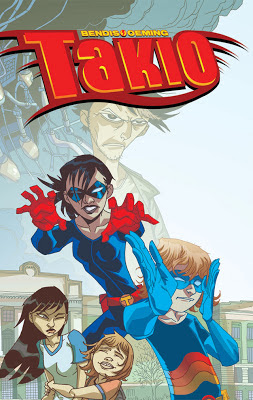 Two sisters in a multi-racial, adoptive family are driving each other insane!

Their overprotective mother makes them walk to school together, eat lunch together and play together.

They can't get away from each other!

But when a one-of-a-kind, once-in-a-lifetime accident gives them real-life superpowers, these two sisters become the first actual superheroes in the entire world.  And it is awesome!

Now the sisters have to learn  to get along so they can save the world and get home by six...

Or they are so grounded.

Brian Michael Bendis and Michael Avon Oeming are the duo most famous for the superb series of comic books that came under the 'Powers' and 'Powers Bureau' titles.

Here they, along with Olivia Bendis, have crafted an all ages title that both manages to be exciting for the adults and gripping for the kids.

The story itself is pure Bendis in that while it is incredibly fast paced yet he spends just the right amount of time on developing the characters themselves.  I've always been a fan of Bendis's style because when he's at his best, he always manages to craft an exciting story but makes the reader care about each of the characters as well.  He is a master of getting the reader, no matter the age, really emotionally involved in what is going to happen to the characters on the page.

While this is an all ages comic book series, there are some quite dark moments dealing with adoption, bereavement, divorce and a couple of scenes of peril that might scare the really young readers out there but it's done in the same style of a Roald Dahl story in that it's scary enough to make you wonder for the characters safety but not enough to give the kid's nightmares.

The art by Oeming is, as always, superb.  However, this title is a bit of a chance of pace for him in that he hasn't gone for the dark film noir style that he is so successful at.  In fact, it's the complete opposite.  For a lot of artists, that approach just wouldn't work but with Oeming's mass of skill behind it, the change really suits the title.  I especially loved how he gave the characters bigger, slightly exaggerated mouths.  That made the characters expressions really fly off of the page.

All in all, this is a fantastic title and I, for one, absolutely loved it and so did my son.  In fact, it was a nice change to be able to sit down with title that I could share with him.  The writing was fast pace and exciting, although what else would you expect from a master like Bendis?  Art wise, the title is positively brilliant thanks to the brilliant illustrations by Oeming.

Well worth picking up.  The ending has left me in no doubt  that there will be a 2nd volume and I can't wait!

Posted by Pat Scattergood at 08:13