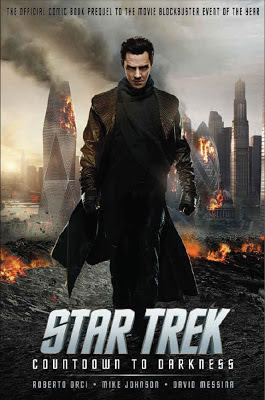 On a routine survey mission to a remote planet, Captain James Kirk and the crew of the Starship Enterprise become embroiled in a decades-old conflict between two factions of the indigenous population.

The flames of their conflict have been fanned by the unexpected presence of a former captain of the Enterprise, long presumed to be dead.

This is a must-have graphic novel for all Star Trek fans!

As a massive Star Trek fan, I was very excited when JJ Abrams was announced to be the one to try to resurrect the franchise.  His first movie was a really good one and so when I read this graphic novel was going to be a prequel to the next movie, I honestly couldn't wait to read it.

Did it live up to those expectations?  Well, yes and no.

The story itself is utterly brilliant.  I loved the idea of the Enterprise and Kirk himself getting sucked in to trying to stop a genocide all while trying  to keep to the letter of the law of the Prime Directive.  It's not the first time that sort of story has been used in the Star Trek universe but this one was written really well.  It was fast paced and exciting yet had some really good moments of character development.

There were a hell of a lot of twists and turns as well.  I love a science fiction story that has twists and turns that keep the reader guessing and this one's no different.  The final page was the one that made me think that I really need to see the movie asap.

I really liked the artwork here.  The characters looked like the actors who portray them in the movie while still having David Messina's signature style to them.  I'm a fan of his work and really like his eye for detail, especially when drawing the alien species that inhabit the Star Trek universe.  He also has a knack for bringing your eye to which ever character is talking with his art and the facial expressions that he puts on the characters.  It really brings your eyes to the dialogue superbly, especially on the quieter more character driven scenes.

All of that is really good but for some reason, there just seemed like there was something missing that I couldn't quite put my finger on.  That's the fine that stopped this really good graphic novel from being a great one and that's a shame because the writing is very well done and the art really has a cinematic feel to it.

Posted by Pat Scattergood at 01:24