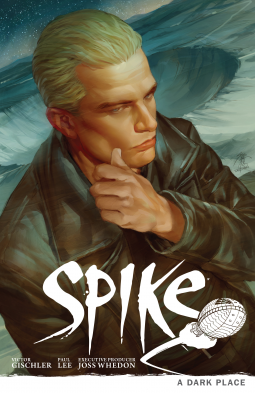 Fresh from his latest attempt to get Buffy to act on her feelings for him, Spike has fled to the dark side of the moon.

His trip leads him to a group of dangerous demons and a rude awakening from his reverie, which in turn leads him on an unexpected adventure to . . . Sunnydale!

As a 'Buffy the Vampire Slayer' and 'Angel' fan, I always felt that Spike was by far the most interesting character of all of them.  His bitter, cynical look at the world around him always had me in stitches and I loved his 'London Boy' shtick that gave his vampire character a better edge than you would normally get from a vampire television show.

This 5 issue run was designed as a spin off from season 9 of 'Buffy The Vampire Slayer' and shows Spike as being depressed after his latest attempts to woo Buffy but this is a story with a difference.

Spike.  In space.  On the moon.  In a spaceship.  With talking bugs.

Yes you read that right.

This graphic novel appears to have really divided the fans out there.  Some have loved it and others have absolutely hated me but where do I stand?

To be honest, I'm not all that sure.

At first the story was a massive departure that I wasn't actually expecting and that throw me a bit.  The story does pick up about halfway through and that's when everything starts to get very interesting.

That said, the writing appears to have got Spike's personality exactly right from his mannerisms to his rather unique insults.  Thanks to his bitter and cynical look on things, there is a hell of a lot of laugh out loud humor from this story and I loved that.  There were some great action sequences as well.

The story itself isn't exactly ground breaking but it's not awful either.  I'm not sure I agree with all the bad reviews of it as it really isn't that bad a story.  I think the bile aimed at it was just because of the departure that the story took from the norm.  While the story isn't 100% successful neither is it as bad as it's been made out to me.

Art wise, this is a well drawn and thought out story.  I loved how Paul Lee managed to get Spike's mannerisms and facial expressions spot on with his art work.  I also really liked how the action sequences looked as well.  Lee managed to make them look busy and exciting without making them look cluttered.

All in all, while this isn't a graphic novel that will set the world on fire, it's  still a good and very funny story.  Plus it's got Spike in it.  What more could you want if you're a 'Buffy' fan?