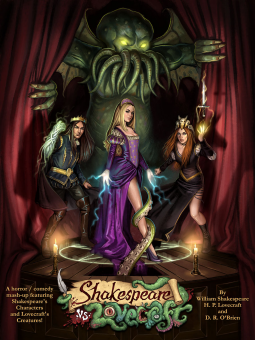 Published By Self Published


Get ready for the War of the literary Worlds in the raucous new horror comedy, Shakespeare v Lovecraft!

In the same putrid vein as Pride and Prejudice and Zombies, Shakespeare v. Lovecraft slithers hideously onto the literary mash-up scene, whispering of cosmic horrors and eldritch tales whilst espousing sweet soliloquies and profoundly contemplating mankind’s place in the universe.

The book follows the story of the powerful magician Prospero, driven dangerously insane by prolonged exposure to the dread Necronomicon, makes a terrible pact with the titanic alien beast known only as Cthulhu. Now only his enchantress daughter Miranda and a handful of history’s greatest heroes are all that stand between humanity and blasphemous eternal subjugation.

Macbeth, King Henry V and more clash with some of Lovecraft’s most memorable monstrosities including Dagon, The Colour Out Of Space, Night-Gaunts, Ghouls, a Shoggoth and, of course, the Great Priest himself.

And which sides will the Dream-God Oberon, the monstrous Caliban and ethereal Ariel favour in this savage clash of worlds?

After seeing the cover for this release, my interest was more than peaked.  It just seemed so different and unique to the ones I've been reading recently that I was quite eager to read it.

I most definitely wasn't disappointed.

Here O'Brien hasn't created a clash of the two worlds, instead he has combined the two brilliantly.  By combining the two of them instead of making it in to a clash of different styles, the author has created a horror comedy adventure with fantastical elements that really gripped me all the way through.  The fact that you would get characters such as Romeo, Miranda and King and Lady Macbeth fighting side by side to try to stem the tide of evil coming their way was a breath of fresh air.  On paper may sound quite cheesy and lame but the story is so well written that you think that the characters of Shakespeare and Lovecraft have always been together like this.

I've read that some reviewers have marked it down for the numerous Shakespeare quotes appearing during the story but surely that's a moot point to mark the story down as it's set up as and marketed as Shakespeare and Lovecraft?  To me, that seems a bit like complaining that a wrestling match has wrestling moves in it.

While this novella wasn't perfect by any stretch of the imagination, there were a couple of scenes that just seemed to meander and go on too long with out having a purpose, this was and is still a refreshing read for someone looking for 'something a bit different' to the normal horror style books here.  The unique and sometimes dark humor in this story, for me, worked really well and balanced out the horror side brilliantly.

Definitely one to look out for.