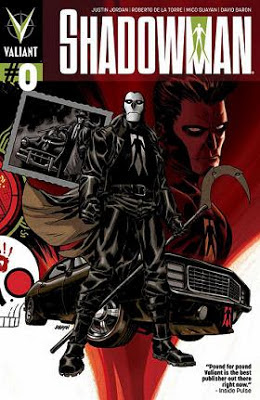 Who is Master Darque?  Why is he such a sick and twisted individual?  Find out here as we finally get to see the story of his origin!

I have to admit that while I liked the look of the 'Shadowman' comics published by Valiant, it never really felt like a horror comic.  While it had supernatural elements, it just never came across as horror.

One of the characters that stood out the most was the twist individual known as Master Darque yet I always wanted to know more about the character himself, more about his motives and the reasoning behind his actions.  In fact, he was pretty much a clean slate as far as evil S.O.B's go.

When this title came out, I was thrilled that we were finally going to see his origin story, see exactly why he was the way that he was but then something nagged me at the back of my head.  Was the story going to live up to the hopes that I had for it?  Was the story going to be more interesting than anything us fans could think up in our imaginations?

Short answer?  Hell yes it lived up to those and then some.

I have read a hell of a lot of origin stories since becoming a massive comic book fan as a kid.  Some were good, some were great then there were the ones that were either downright awful or just disappointing.  This title definitely fits in to the ones that are great.

I would even go so far as to say that this is one of the best origin stories that I have read in a very long time.  Justin Jordan's origin story for the famous villain more than does the character justice.  In fact, Jordan has written a dark and foreboding issue that is exactly what a villain of this caliber deserves.

Every key moment of the story itself had me gripped and on the very edge of my seat.  I loved how Jordan balanced the small moments of joy with the moments of darkness in such a way that, as a reader, you knew the story was going to go downhill for characters and when it did, it sure as hell didn't disappoint.  In fact, it can be described easily with one word and that's wow.

The art work here is spot on perfect for the story.  The art manages to really bring the story to life and manages to make the action leap off of the page at the reader.  What makes that more amazing is the simple fact that there were so many people that had a hand in the art work yet not once did it feel  disjointed or jarring with it's subtle chances.

With this issue, it's easy to see why Valiant is  fast becoming one of the best publishers out there and becoming massively popular with the comic book fans.  Definitely one to pick up if you like exciting and intelligent comic books.