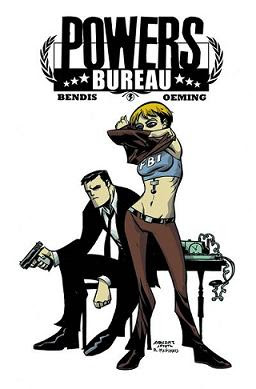 The Eisner Award-winning creator-owned series that shows cops and capes like you've never seen them before!

With all superpowered cases now federal cases, Walker and Deana are up to their necks in the most dangerous chase of their careers. Also, Deena is pregnant! So there's that.

Plus: another look behind the scenes at the POWERS TV show!

After the shocking ending of issue three, this one had a hell of a lot to live up to and the team of Bendis / Oeming have most definitely not disappointed.

So far 'Powers Bureau' has been a really good evolution of the Powers series created by Bendis and Oeming.  It came time for the series to grow and change and they have handled it really well.  The storyline for this one, someone is making 'powers' babies and there's also what looks to be a cover up, has been rolling along nicely and some of the pieces are slowly but surely fitting together.

One of the things I have liked the most about the new series is that while a lot of the action focused on Pilgrim there has been a real mysterious tint to Walker and the time he spent away from Pilgrim.  Now he's been pushed to the forefront of the story, even going undercover but that's as much of the story I want to tell you as it would be a real shame to spoil the twists and turns.

Bendis' writing is once again up to his incredibly high standard.  He's one of the most reliable writers in the comic book world and that's evident here as well.  The 'Powers' stories have always been good, a lot of the time even great.  That's no different here.  The twists are really well done and the characters are definitely the strong point of the series.  They always have been.  While the characters are fully fleshed out, there always seems to be an air of mystery to them like there's always something new to find out.  I've always liked that about Bendis' writing and he really seems to bring his 'a' game when writing 'Powers'.

Once again, the high quality of art set by Oeming in the other issues continues it's momentum big time in to this fourth issue.  The action in this issue really pops off the page and really hooks the reader in to what is happening.  That's definitely shown in the action scenes and most specifically the ending page.  Where the ending of issue 3 left me wanting to get to issue 4 as soon as possible, this one does exactly the same.  When I got to the last page, I really wanted to jump in and get in to the next issue straight away.  Oh well, hopefully the next issue will be out soon.

All in all, this is definitely a series that is worth keeping an eye on.  It honestly just seems to get better with each issue.  This one has been my favourite so far of the four issues so it really sets a high standard for the next issue but I have a hell of a lot of faith in the team of Bendis and Oeming to pull it off.